Isolated avulsion fracture of medial head of gastrocnemius muscle in a child.

Image: Sagittal fast spin echo (FSE) proton density (TR/TE [repetition time/echo time, msec], 3000/40) sequential MR images from medial (A) to lateral (D) and corresponding sagittal T2-weighted (4350/67) fat saturated (FS) sequential MR images from medial (E) to lateral (H). A mildly displaced avulsed fracture fragment off the posterior medial femoral condyle is seen (solid arrows). Fibers of the tendon of the medial head of the gastrocnemius muscle (dashed arrows) can be seen inserting onto the fragment. Edema-like signal is present within the underlying medial femoral condyle (asterisks). The insertion of the adductor magnus tendon on the adductor tubercle (open arrows) can be seen just anterosuperior to the avulsed fragment on the medial images. Tears of medial head of gastrocnemius muscle at its myotendinous insertion is the most common injury in patients presenting with Tennis Leg. Injuries to the medial head of gastrocnemius tendon away from the musculotendinous junction are less commonly reported and include: partial tears and tendinosis near its insertion on the medial femoral condyle. Isolated avulsion fractures at the femoral insertion site of the medial head of the gastrocnemius muscle are very rare with only two reported cases in the English medical literature (5, 6). Here we report an isolated avulsion fracture of medial head of gastrocnemius muscle in a 13-year-old boy after a skiing injury, treated with conservative management, which to our knowledge is the youngest reported patient with this rare injury. Case: A 13-year-old boy presented to our sports medicine clinic with left knee pain and swelling. He had injured his left knee one-week prior while downhill skiing, when he had lost control and his left leg had slid forward and externally rotated. During the injury he felt a ‘pop’ in his left knee with immediate pain and swelling. On physical exam he had pain with palpation over the medial joint line and medial aspect of the distal femur, raising clinical concern for a medial meniscal tear or medial collateral ligament injury. Radiographs of the left knee showed only a trace joint effusion. Given the extent of symptoms and clinical concern for a medial meniscal tear and medial collateral ligament injury the child was sent for an MRI of his left knee. This showed an avulsion fracture of the medial femoral condyle at the insertion site of the medial head of the gastrocnemius muscle with fluid signal intensity between the fracture fragment and the femoral condyle. There was only mild, less than 4 mm of displacement of the avulsed fracture fragment. The patient was treated conservatively with a knee brace and physical therapy. At follow up the patient had full range of motion and resolution of pain. 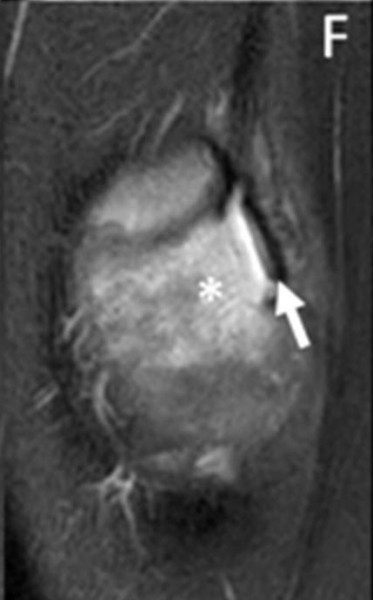