Dear JRCR editor(s): We hope you will consider the following case as suitable for submission to the JRCR: Our patient was a 6-year-old previously healthy, immunized and developmentally normal female. She presented with a one-day history of 5-6 episodes of bilious emesis, periumbilical pain and intolerance to fluids or solids. The emergency room physician was particularly struck by how foul the emesis smelled and how unusual it looked. She had 2 isolated incidents of nonbilious emesis in the past 3 weeks. The patient had no bowel movements for 2 days but was passing flatus. Patient did have a history of constipation. There was no family history of inflammatory bowel disease or celiac disease but her mother did have a history of irritable bowel syndrome. On physical examination, the patient was afebrile and demonstrated periumbilical tenderness. Bowel sounds were present and her abdomen was nondistended. Laboratory investigations revealed a mild leuokocytosis but otherwise inflammatory markers were normal. The patient was admitted into hospital, during which she had intermittent bilious vomiting. The general pediatrics, gastroenterology, general surgery and radiology services were involved in the care of this patient. Imaging Findings: While admitted numerous investigations (Abdominal x-ray, upper GI and small bowel series, abdominal ultrasound, upper GI endoscopy, CT abdomen) were ordered to determine the etiology of her symptoms. On Day 1 of admission, the initial abdominal radiograph was normal and showed no signs of obstruction (Figure 1). An upper GI series followed, which demonstrated slow transit with contrast being held up in a dilated jejunal loops with mild mural thickening (Figure 2). On Day 2, ultrasound examination demonstrated mildly dilated, fluid-filled proximal bowel loop with mild wall thickening and no free fluid (Figure 3). The pediatric gastroenterology service was consulted at this point and an upper endoscopy was performed which was found to be normal. Radiograph performed on Day 3 following the upper endoscopy demonstrated a barium-coated mass in the left upper quadrant and a few dilated proximal small bowel loops (Figure 4). On the subsequent radiograph on Day 5, the barium coated (from upper GI series) intraluminal mass was noted to have moved from the left upper quadrant to the right lower quadrant and multiple central air fluid levels were present suggestive of bowel obstruction (Figure 5). No evidence of pneumatosis or pneumoperitoneum was seen on plain radiographs. On Day 6 of admission, a contrast enhanced computed tomography (CE-CT) of the abdomen and pelvis was completed, without oral contrast as per normal protocols in our facility. This demonstrated a barium-coated (from upper GI study contrast) mass with a heterogeneous internal density in the distal jejunum/proximal ileum with no central contrast enhancement (Figure 6). There was a barium-coated “tail” extending distally from the mass (Figure 7). No gastric bezoar was noted. General surgery was consulted and the patient was taken to the operating room for laparotomy. A peri-umbilical laparotomy was performed and a mass in the jejunum was discovered. Edema and dilatation of the proximal bowel was present, with collapse of bowel distally (Figure 8). The mass could not be milked. A transverse enterotomy in the jejunum revealed a trichobezoar adhering to the mucosa (Figure 9). The trichobezoar was removed and bowel was closed. There were no other visceral abnormalities upon surgical investigation. Post-operatively, upon further discussion with parents, clinicians were notified that their daughter had a history of eating her hair and the couch pillows one year ago. It was believed that she was no longer doing this. The patient had an uncomplicated post-operative course. She was seen a month later in the general surgery clinic for follow up and was doing well. A psychiatric referral has been arranged. In this report, we describe a case of an atypical localization of a trichobezoar in a 6-year-old girl, who presented with small bowel obstruction. A jejunal bezoar is a rare cause of small bowel obstruction. It can be a diagnostic challenge and can lead to significant complications if there is a delay in diagnosis. Through this case we describe the clinical presentation of the patient and demonstrate the progression of multimodality radiologic findings of a small bowel trichobezoar. I look forward to hearing from you. Rav 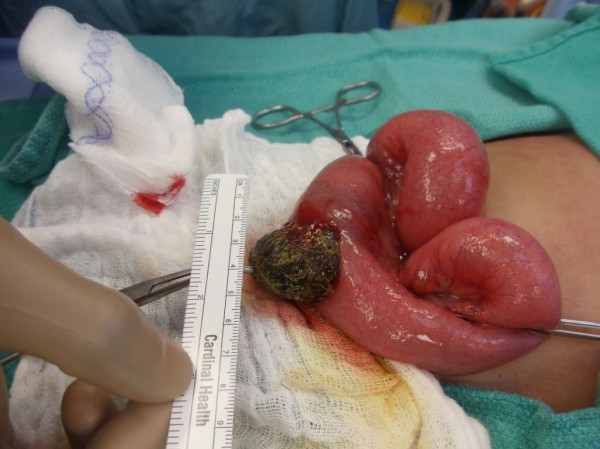