Vesicovaginal reflux (VVR) which is retrograde flow of urine into the vaginal vault during voiding is the commonest cause of urocolpos in the absence of vaginal obstruction. Diagnosis of this condition is usually clinically by urologists and gynecologists and it is therefore rarely encountered by radiologists and so is rarely reported in the radiological literature. We report a case of VVR with describing clinical and radiological manifestations. A 15 year-old adolescent, weighing 54 kg and 1.36 m height (body mass index = 29.2 kg/m2), with a normal menstrual history presented with urinary incontinence since childhood. Clinical examination of the external genitalia was unremarkable. There was continuous dribbling of urine from the vagina. Renal function tests and complete blood counts were within normal limits. Urine examination revealed pyuria with gram negative bacteria. Urine culture reported E. coli. Pelvic ultrasonography demonstrated an anechoic cystic structure posterior to urinary bladder outlined by cervix (Figure 1.). A sonographic diagnosis of hydrocolpos was made with rest of the study being normal. The uterus, ovaries and the urinary bladder were normal. Post micturition sonography showed complete emptying of the vaginal fluid and post void residual urine of 45 ml in the urinary bladder. The ureteric jets on both ureterovesical junctions were normally seen within the bladder. The patient was subsequently referred for vaginoscopy under general anesthesia that revealed no features suggestive of vaginal obstruction. The findings were confirmed on voiding cystourethrogram (VCUG) which represents dynamic reflux of contrast into vagina during early phase of voiding (Figure 2-A and 2-B) with complete evacuation of hydrocolpos by the end of voiding. No vesicoureteral reflux (VUR) was seen bilaterally. The possibility of duplication or ureteral ectopia was also ruled out on intravenous pyelogram (IVP). Gross urocolpos is most often secondary to obstructive causes like imperforate hymen, vaginal septum and vaginal atresia. VVR represents an uncommon cause of urocolpos. The vaginal distention in VVR related urocolpos may be complete, partial or minimal; gross distention has been rarely described especially in pediatric population which makes the present case unusual. VVR is a common functional disturbance which is not related to anatomic or obstructive pathology and is secondary to behavioral factors that prevent the maturation of normal voiding control. Upon voiding, urine passes into the vaginal vault through the introitus. During standing, urine which was pooled in the vagina dribbles out making underclothes wet. Patients are usually prepubertal obese girls whose large labia prevent the passage of urine and who do not put their legs wide enough apart during micturition. The condition has also been reported in thin girls, in cases of hypospadias, labia minora adhesions, ectopic ureter, ureteral duplication and spastic pelvic floor muscles due to cerebral palsy. Recurrent urogenital infections, irritation of the genitalia, bad smell and vaginal discharge may be other clinical presentations. The urinary tract infection may be real or due to contamination of urine by the vaginal flora. Differential diagnoses of a large pelvic cystic lesion in a prepubertal girl include fluid in the cul-de-sac, fluid filled bowel, cystic masses located in cul-de-sac or vagina, obstructive hydrocolpos or haematocolpos in cases of imperforate hymen. In our case, absence of hydrometra and a normal menstrual history ruled out an imperforate hymen. Another differential diagnosis for VVR is vesicovaginal fistula (VVF). A detailed clinical history and imaging can help differentiate these two disorders. The cases of VVF manifest with continuous dribbling of urine from the vagina; however, in a patient with VVR, the bladder evacuates into the vagina intermittently causing intermittent dribbling of urine. Also, VVF occurs secondary to post-surgical and obstetric complications, pelvic malignancy and trauma and radiation therapy for pelvic neoplasms. In our case, the 15-year old female had no predisposing factor for VVF. A real-time sonography upon micturating with the legs tightly opposed to stimulate VVR and with the legs wide open to facilitate easier bladder emptying was suggested by Kilicoglu G et al. and may help diagnosing this condition. 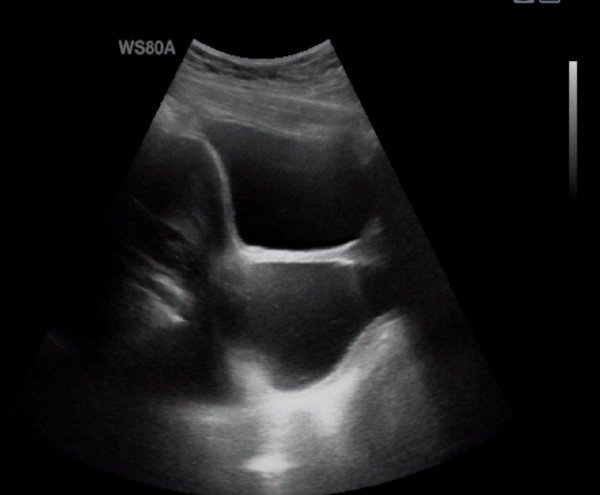