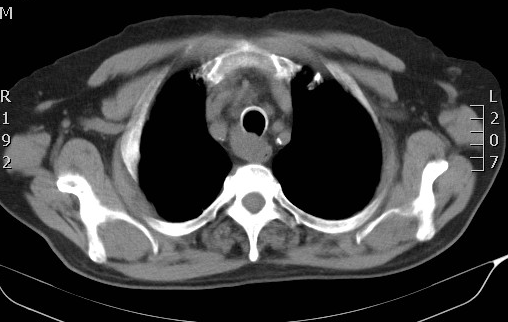 Mass in relation to the upper third of esophagus and posterior tracheal wall, which seemed to be invaded. A fibrobronchoscopy and a gastroscopy were practiced, but they did not provide data of interest, so a PET/CT was indicated. It showed metabolic activity uptake (highest SUV in mediastinal mass = 3.8, and highest SUV in right upper lobe = 1.4). Endobronchial ultrasound (EBUS) with puncture of the mass was practiced, and it was informed like a salivary gland tumor type.Four years later the radiological images were still similar to the previously done.