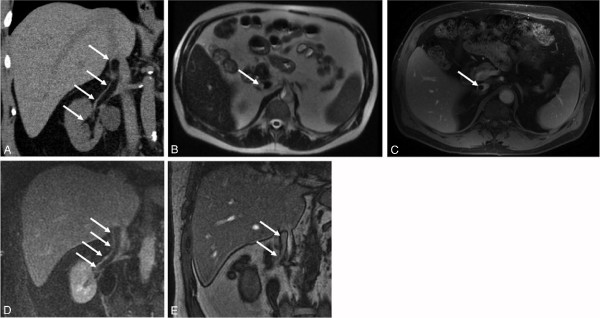 A 59-year-old man initially presented to an outside hospital with right flank pain and gross hematuria due to a partially obstructing right ureteral calculus. An unenhanced computed tomography (CT) scan of the abdomen and pelvis performed at the time of diagnosis incidentally revealed a homogeneous smooth tubular fat attenuating mass within the anterior right renal vein extending into the inferior vena cava (IVC) and terminating at the proximal intrahepatic portion of the vena cava (Figure 1a). The patient was referred to our institution for an MRI to further characterize the mass. The MRI showed a well circumscribed mass that was hyperintense on T2 imaging and low signal on fat saturated images. The mass demonstrated peripheral chemical shift artifact on out of phase imaging and did not enhance with contrast (Fig. 1b-e). These findings were compatible with a lipoma extending from the segmental branches of the right renal vein to the main renal vein and into the IVC. The mass occupied the majority of the lumen of the main renal vein and approximately 50% of the lumen of the affected IVC. Fig. 1. Coronal CT image (A) demonstrates a well-circumscribed homogeneous fat attenuating intravascular mass (arrows) extending from the renal veins to the inferior vena cava. Axial T2 weighted MR image (B) shows a hyperintense round mass in the inferior vena cava that is hypointense on postcontrast T1 fat saturated axial (C) and coronal (D) MR images and demonstrates peripheral chemical shift artifact on out of phase coronal MR imaging (E). The lesion does not enhance.