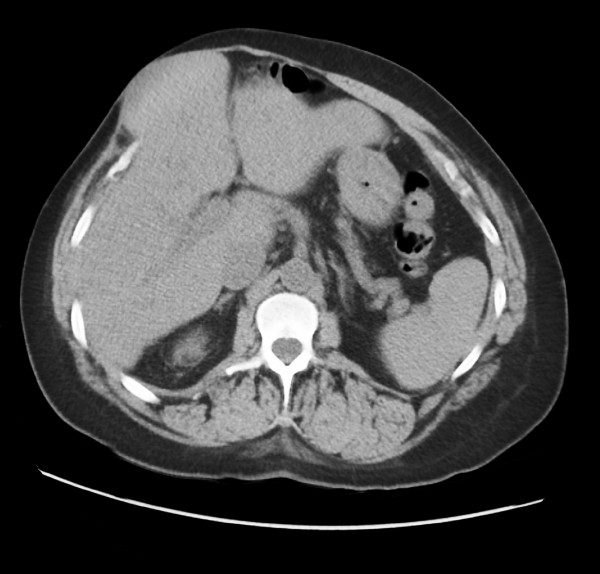 CASE SUMMARY: Fifty six year old African American male with BMI of 29.5 presented with chronic intermittent right upper quadrant abdominal pain and bulge for the past 6 months which had gradually worsened over the past 8 weeks. His past medical history is significant for Hepatitis C, short bowel syndrome on total parenteral nutrition, and recurrent pancreatitis. He has had multiple abdominal surgeries including a midline laparotomy 15 years ago followed by an open cholecystectomy one year ago, and right inguinal hernia repair six months ago. On examination, patient was found to have a right upper quadrant tender, firm, non-reducible mass. CT scan revealed a right anterolateral abdominal wall hernia containing liver. There was no reported liver herniation in previous imaging studies done 9 months prior. Patient did not require immediate intervention, and he was managed conservatively. DISCUSSION: Incisional liver herniation through the anterior abdominal wall is a rare occurrence. Because of its rarity it poses both diagnostic and therapeutic difficulty. To the best of our knowledge, there are only four cases of anterior abdominal wall incisional liver hernia in post Cholecystectomy which have been reported in the literature, (table 1) in addition to three case following CABG and one following colostomy. The uniqueness about our patient is that he has mild non localized abdominal pain with normal liver enzymes. He does not have any history of post-surgical infections, hepatomegaly, trauma or morbid obesity. To best of our literature search there are 8 reported cases of liver herniation in general. Of them only one patient died of sepsis and the majority treated non-surgically. This is the fifth reported patient to have such pathology after an open cholecystectomy in literature. According to the literature open cholecystectomy and CABG were common procedures associated with ventral liver incisional hernia. There is no available evidence suggesting surgical repair is superior to conservative management. CONCLUSION: Incisional liver herniation through the anterior abdominal wall is extremely rare condition. This finding had been missed and had been undiagnosed by physical examination by multiple practitioners. No clear evidence for benefit of surgical management over conservative treatment.