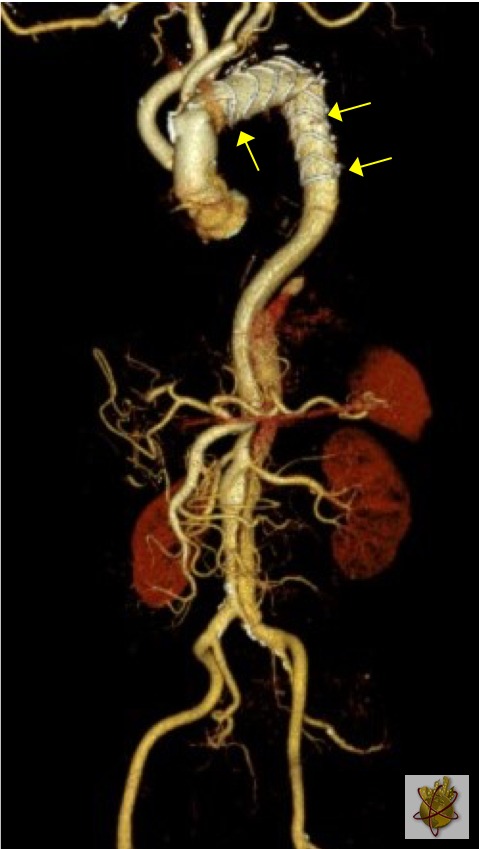 An 81-year-old man first presented with hoarseness of voice and paravertebral mechanical low back pain of 1 month’s duration. He had hyperlipidemia on lifestyle and diet modifications, with no other medical or surgical history. There was no associated cough, sore throat or fever, and he denied any other infective symptoms. He did not have any hemoptysis, odynophagia or dysphagia and there were no significant constitutional symptoms such as loss of appetite or weight. He also did not have any personal or family history of cancer. He had a 4-pack year smoking history, but claimed to have quit 35 years ago, and did not take any alcohol. There was no neck trauma, intubation, or recent head and neck surgery.

Contrast-enhanced CT Neck and CT aortogram revealed medialization of the left arytenoid muscle and dilatation of the left laryngeal ventricle, supportive of left vocal cord paralysis. The CT also revealed a large saccular aneurysm with mural thrombus in the aortic arch. This aortic arch aneurysm was associated with a dissection flap beginning distal to the left subclavian artery origin and extending down to the level of the aortic bifurcation. There was no periaortic fluid, pericardial effusion, or contrast extravasation noted. This saccular aortic arch aneurysm is likely to have compressed the left recurrent laryngeal nerve, resulting in left vocal cord palsy.

Cardiovocal syndrome, also known as Ortner’s syndrome, was classically described in a patient with hoarseness of voice caused by the impingement of the left recurrent laryngeal nerve between the aortic arch and an enlarged left atrium due to severe mitral stenosis. The left recurrent laryngeal nerve is more commonly paralyzed than the right. This is postulated to be in view of its extended course, particularly as it involves the aortopulmonary window. This syndrome has since been seen in many other cardiovascular diseases including aortic dissections and aneurysms, where the nerve palsy is more likely to be due to direct pressure of the dissecting aneurysm on the thoracic part of the nerve. There are five cases of aortic dissections presenting with dysarthria in literature, all of which were painless. Other that our present patient, only two others eventually underwent surgical repair, out of which only one experienced complete resolution of her symptoms. This patient was also the quickest to present and subsequently undergo repair. We believe that the prognosis of recurrent laryngeal nerve paralysis is dependent on the degree and duration of compression.

• Cardiac and vascular pathologies may occasionally present with seemingly unrelated symptoms and signs such as hoarseness of voice. Several of these can also be potentially life-threatening and warrant early detection. • In the approach of an uncommon presentation, it is prudent to revisit fundamental principles of anatomy and physiology in order to recommend appropriate investigations. • Maintain a high index of suspicion and look out for red flags even though the patient may otherwise be initially asymptomatic and well. 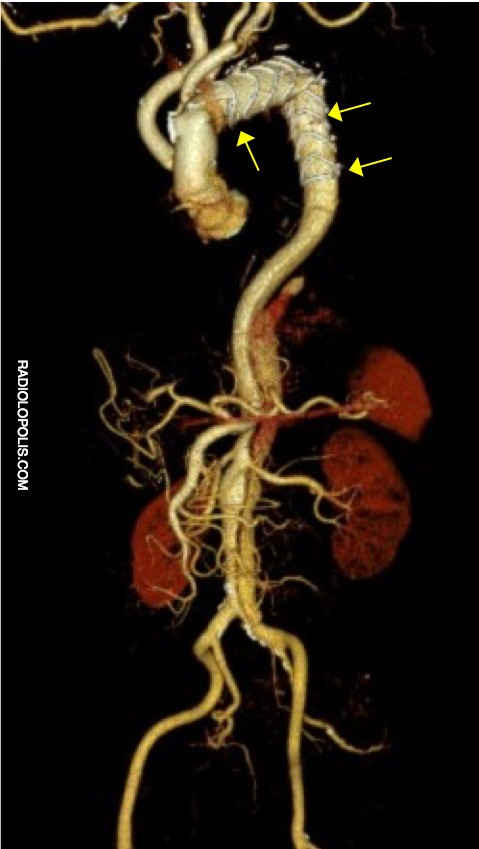