This 63-year-old male presented with acutely worsening weakness, urinary retention, and severe low back pain in the setting of milder symptoms for weeks. An MRI was initially requested by the ED due to concern for cauda equina syndrome. However, the patient was initially unable to tolerate this. Instead, a CT myelogram was performed. This showed numerous subdural nodular filling defects, suspicious for metastases. There was no high-grade spinal canal narrowing, so the patient was treated conservatively with steroids rather than surgery. He was later able to tolerate MRI, which showed multiple enhancing subdural metastases, as well as multiple vertebral body metastases. Subsequently, CT of the chest, abdomen, and pelvis showed a large right renal mass, pulmonary metastases, and mediastinal lymphadenopathy. Transbronchial lymph node biopsy showed metastatic renal cell carcinoma.

Spinal subdural metastases are exceedingly rare, with only a handful of previously reported cases. To our knowledge, this entity has not been shown on CT myelography previously. As many patients cannot tolerate MRI in the acute setting without anesthesia, this case is important and instructive in showing the CT myelographic appearance of this disease. Subdural metastases are an important diagnosis to make, because they suggest widespread metastatic disease and significantly impact overall patient prognosis. They can also contribute to spinal cord or cauda equina compression in the acute setting. Differential considerations include multiple meningiomas, lymphoma, sarcoidosis, and tubercolosis. Peripheral nerve sheath tumors would not be strictly subdural but could have a similar appearance.

Though rare, spinal subdural metastases are important to diagnose because they unfortunately negatively impact patient prognosis. While scant prior reports of subdural metastases have shown this entity on MRI, it can be diagnosed on CT myelography when deemed clinically necessary. 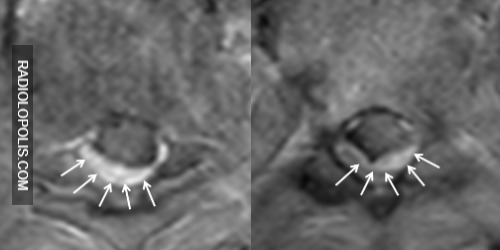 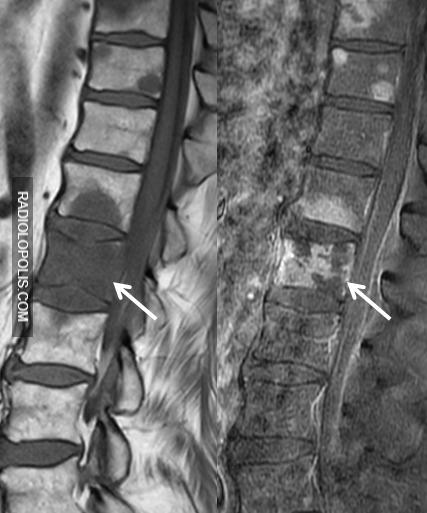 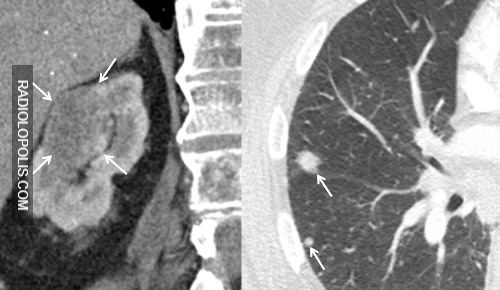