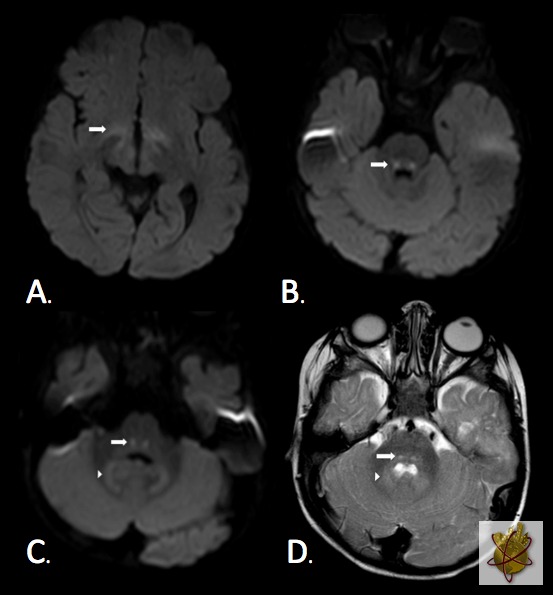 Following an initially unremarkable pregnancy, a 34-week-old male fetus was discovered to have cardiac rhabdomyomas on prenatal ultrasound. After an uneventful full-term delivery, postnatal ultrasound revealed a cyst in the right kidney. A subsequent Magnetic Resonance Imaging (MRI) of the brain demonstrated multiple subependymal nodules and several scattered cortical tubers, diagnostic of Tuberous Sclerosis Complex (TSC). The patient displayed unremarkable psychomotor development until the fourth month of life, when he exhibited several documented episodes of right arm extension, head tilting to the right, and short arrest of motor activity lasting about one minute at a time—compatible with complex partial seizures. Due to the refractory nature of these complex partial seizures to conventional antiepileptic treatment, the patient was enrolled in a randomized, double-blind seizure prevention clinical trial for infants with TSC. At the time, vigabatrin (VGB) treatment was initiated with progressive doses reaching 150mg/kg/day.The patient did not experience any additional generalized seizures upon the initiation of VGB until ten months of age, whereupon a routine electroencephalogram (EEG) recorded seizures with breakthrough events, for which the patient was admitted for continuous video EEG to determine seizure frequency.

TSC is characterized by hamartomatous lesions involving multiple organ systems. Some patients with TSC experience infantile spasms or other forms of epilepsy. Vigabatrin is considered first-line therapy in infants with TSC and infantile spasms, as well as in pediatric patients aged 10 to 16 years with treatment refractory complex partial seizures. Other patients receive it for compassionate use or Institutional-board approved protocols, as is seen in this case. Other diagnoses that receive VGB therapy include cortical dysplasia, metabolic encephalopathy, and mesial temporal sclerosis. Vigabatrin is a γ-aminobutyric acid (GABA) analog that irreversibly inhibits γ-aminobutyric acid transaminase, serving to increase the concentration of GABA in order to depress epileptogenic circuits. VGB is a first-line therapy based on its remarkable effectiveness in reducing seizures, (>95% reduction), and good tolerability. Initially, there was only one well-known, demonstrated side effect—retinotoxicity—resulting in permanent visual field constriction in approximately 30% of patients after 1 year and termed “vigabatrin-associated visual field loss” (VAVFL). Previously, VAVFL was the limiting factor to the use of VGB, but in more recent years the safety of VGB has been challenged by the emergence and recognition of vigabatrin-associated brain abnormalities on MRI. VABAM encompasses a spectrum of changes that represent new-onset vigabatrin-related bilateral and symmetric T2 hyperintensities with varying degrees of restricted diffusion involving any or all of the following structures: the globi palladi (most commonly affected), thalami, midbrain, dentate nuclei, brainstem, corpus callosum, tectal plate, or medial longitudinal fasciculus. VABAM affects a small subset of the pediatric population. Review of current Literature indicates that vigabatrin associated changes nearly exclusively affect children younger than 2 years, and in particular, the infancy period. There is no evidence of VABAM affecting individuals over the age of two. Pathophysiology of VABAM is not well understood. Several animal studies have implicated a demyelination process with associated intramyelinic edema, intracellular cytotoxic edema, and microvacuolation of the deep brain structures. The occurrence of these findings predominantly in the infancy period has led to the suggestion that brain maturation may play an important role, with vulnerability of immature myelin to the toxicity of vigabatrin a consideration. Other considerations include an indirect infant effect related to elevated GABA levels, or that pathologic neuronal epileptogenic circuitry may make infants susceptible. Additionally, the distribution of these changes within the deep brain matter may reflect a specific glial or neuronal vulnerability to this medication. Little attention has been shifted towards researching vigabatrin-associated brain abnormalities on MRI since their appearance in the l

Predominantly within infancy, vigabatrin utilization can lead to asymptomatic or symptomatic manifestations of symmetric and bilateral MRI signal hyperintensities with varying degrees of restricted diffusion involving the globus palladi, brainstem, thalami, anterior commissure, tectum, and dentate nuclei. Asymptomatic VABAM have been demonstrated to be dose-dependent and reversible. Symptomatic VABAM is seemingly dose-independent, and potentially associated with concomitant hormonal therapy. 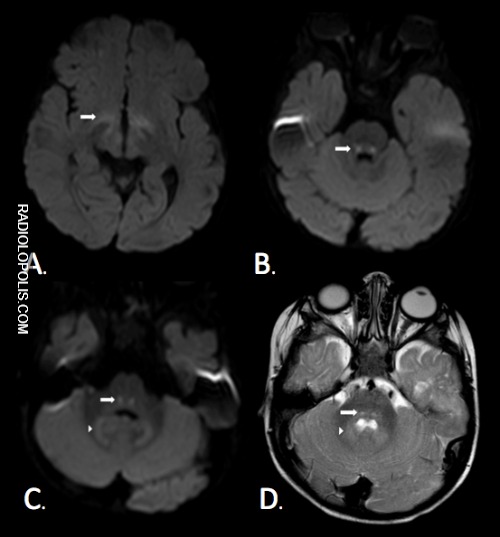