Alveolar soft part sarcoma of the retroperitoneum: A case report 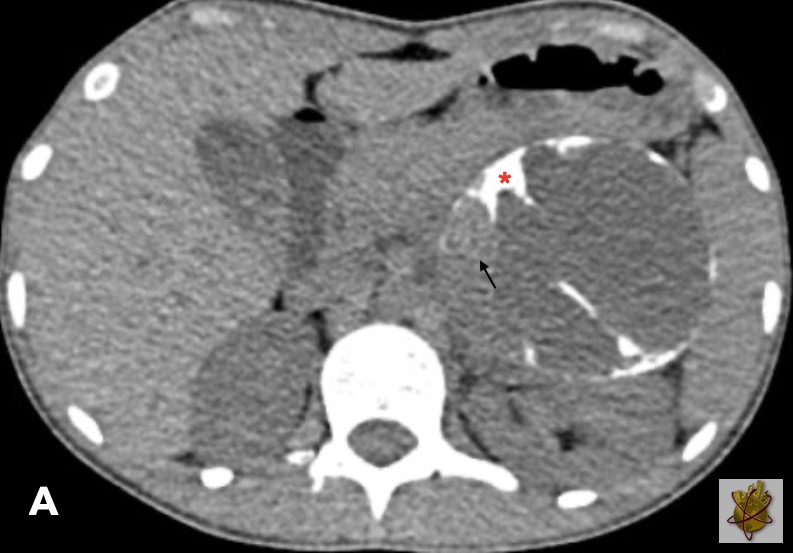 Alveolar soft part sarcoma of the retroperitoneum: A case report

A 16 years old female patient presented with complaints of left flank pain and anorexia. On physical examination the abdomen was soft, non tender with no organomegaly. All the blood parameters including serum alpha fetoprotein levels were within normal limits.

Computed tomography of the abdomen revealed a large well-defined solid cystic mass lesion in the left anterior pararenal space with multiple irregular septae, linear and irregular dense calcification within and along the wall (Fig 1A). On post contrast scans, it showed peripheral enhancement with enhancement of the solid component (Fig 1B). On MR heterogeneously hyperintense on both T1W & T2W sequences (Fig 2A & 2B) and showed enhancement on post gadolinium scans (Fig 2C). There was no wash out of the contrast on delayed phase of dynamic scans. On chemical shift imaging, there was no signal drop in the lesion. The lesion showed areas of restricted diffusion in the solid component on DW imaging (Fig 3A & 3B). Based upon the above mentioned CT and MR findings a possibility of retroperitoneal teratoma with malignant transformation was considered. The patient underwent exploratory laparotomy with excision of the lump. Intraoperatively a large lesion of solid cystic consistency was found anterior to the left kidney and posterior to the stomach which contained hemorrhagic fluid. Dense adhesions were present between the lesion, renal vessels, splenic vessels and left adrenal gland. On gross examination, the tumor was a globular, well encapsulated grey white cystic solid cystic, soft tissue lesion measuring~10x9x6.5 cm. Cut surface showed a well encapsulated grey white cystic friable tumor, with wall thickness 0.2-0.4 cm with normal compressed adrenal gland was appreciated at one pole of tumor separated by the capsule. Calcified areas were seen within the tumor substance. Microscopic examination revealed a tumor with cells arranged in alveolar pattern separated by thin fibrovascular septae, and focally in solid sheets. Interspersed areas of calcification, hemorrhage and necrosis were identified. Individual tumor cells were round to polygonal with pale granular eosinophilic, friable cytoplasm, coarse chromatin and prominent nucleoli. Presence of intracytoplasmic crystals was noted in few of the tumor cells which was positive for Periodic acid Schiff (PAS) with diastase treatment. On immunohistochemistry, the tumor cells were focally positive for vimentin and membrane antigen (EMA), synaptophysin, S100, while negative for cytokeratin, epithelial chromogranin, CD10 and HMB45. Histological and immunohistochemical findings were thus consistent with the diagnosis of ASPS of the retroperitoneum. Post-operative recovery was uneventful. After 3 months, the follow up abdominal CECT revealed no residual or recurrent lesion.

Clinical & Imaging Findings: The clinical symptoms are not pronounced due to slow growth of tumor. ASPS is prone to early metastasise due to extreme vascularity and its microvascular invasion, high recurrence rate after surgery and poor prognosis. Imaging findings are nonspecific. Non-contrast CT shows iso or hypodense mass compared to skeletal muscles. ASPS shows strong enhancement on CECT with central necrosis in up to 75% of the cases. At MR imaging, the tumor is often well circumscribed, which can be attributed to the fibrous pseudocapsule surrounding it. The signal intensity is heterogeneous in most tumors. The tumor typically has intermediate signal intensity— mildly higher than that of muscle—on T1-weighted images and relatively high signal intensity on T2weighted images, with multiple flow voids. The intermediate or mildly high T1 signal intensity is perhaps due to its rich vascularity and intratumoral bleeding, in addition to the slow-flowing blood within the tumor [2]. There is strong and almost uniform enhancement with IV contrast medium. Conventional angiography typically shows enlarged feeding arteries and early filling of large draining veins and delayed washout of contrast medium. Increased perilesional and intralesional vascularity can be seen on color doppler ultrasonography, CECT, CEMRI, and in angiography. The presence of a large soft-tissue mass associated with large peritumoral vessels is strongly suggestive of ASPS. The presence of peritumoral vessels necessitates arteriovenous malformation (AVM) as a differential diagnosis.A typical arteriovenous malformation shows rapid draining of contrast agent due to high-flow shunting, whereas ASPS shows a delayed washout pattern and intense solid tumor staining, findings not encountered in vascular malformations. Purely venous malformations are visualized at venous angiography and not at arteriography [7]. Histopathology Findings: Histologically RCCs, adrenal cortical carcinomas, and paraganglioma may mimic ASPS [8]. Majority of ASPS cases show classic histological patterns composed of uniform organoid nests of polygonal cells with focal pseudoalveolar arrangement. The tumor cells are rich in cytoplasm, containing PAS positive diastase resistant granules and characteristic crystals. The nuclei are round to oval, with irregular chromatin pattern, prominent nucleoli and infrequent mitoses. ASPS is immunohistochemically negative for neuroendocrine and epithelial markers, and may be occasionally positive for myogenic markers [8].

ASPS is a very rare type of sarcoma and carries a poor prognosis. Imaging features of a large soft tissue mass with large peritumoral vessels suggest the diagnosis. However, histopathological confirmation is needed.Metastases are frequent, mainly in the lungs, bones, and the brain It commonly involves the muscles and soft tissues, particularly those of the lower extremities (buttocks, thighs and legs). It may arise in the upper extremities, head and neck regions, especially in a child; but could also have extra muscular localizations, in the female genital tract, the trunk, the mediastinum, or the retro peritoneum. Complete surgical resection is the treatment of choice. Postoperative adjuvant radiotherapy and chemotherapy are effective in reducing risk of local recurrence and distal metastasis. 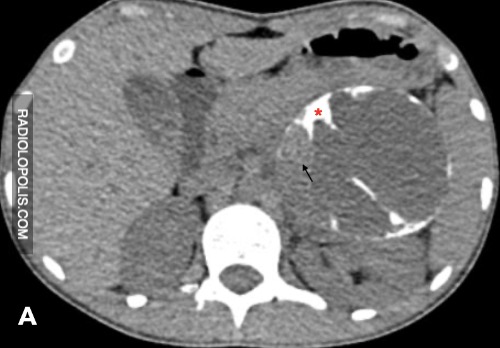 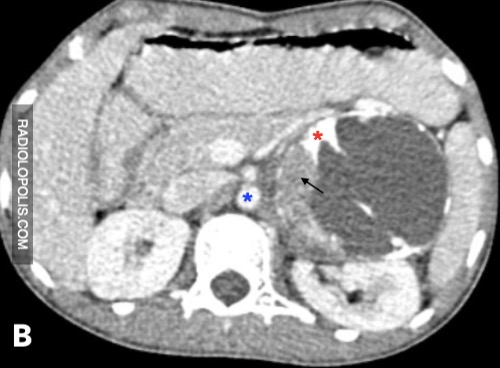 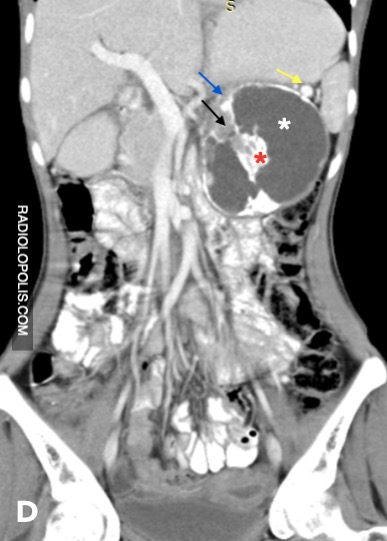 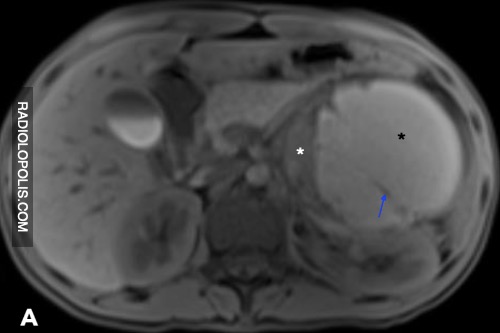 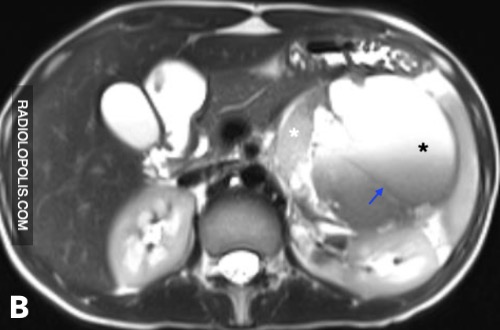 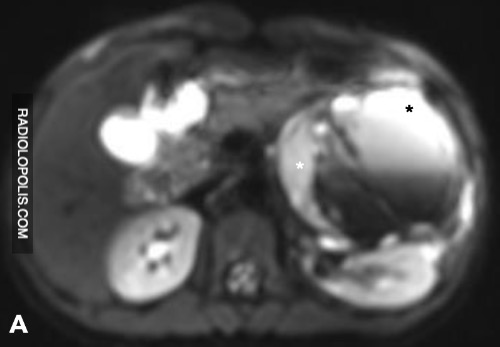 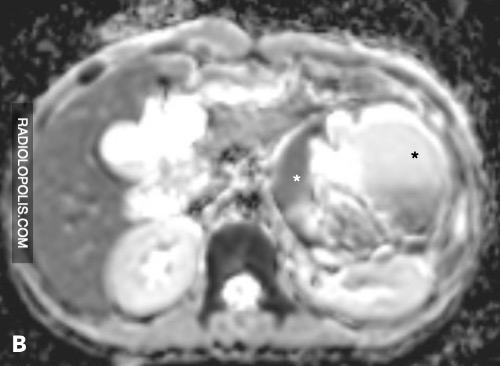 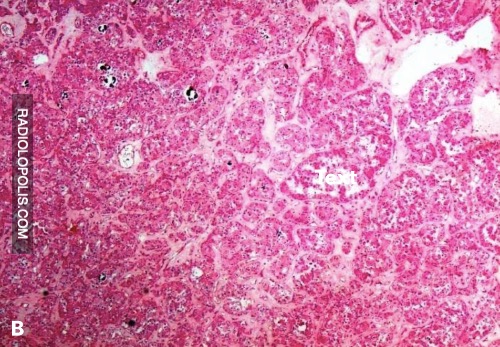