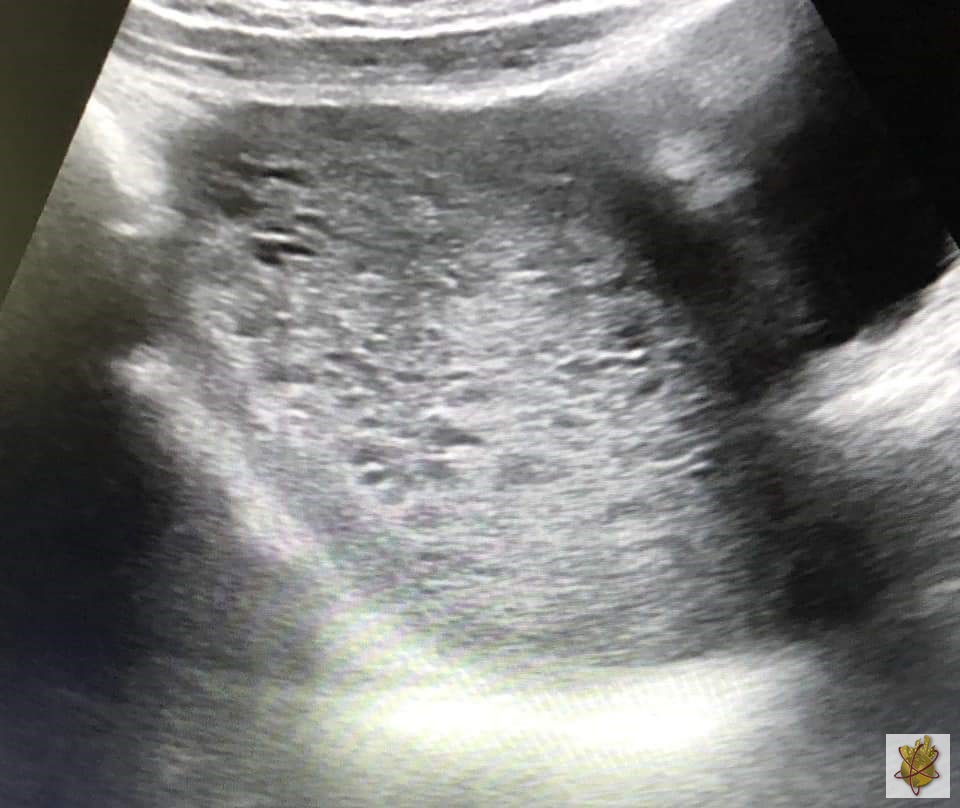 A 23-year-old female with Gravida 2- Para1- Living1- Abortion 0, was referred to our institution at 13+1 weeks of gestation with the report of suspicious twin gestational sacs. She had conceived naturally without any artificial aid. The patient was not booked. She complained of excessive vomiting. No other complaints were present. Previous pregnancy was uneventful with normal vaginal delivery. No significant past or family history was present. Her general and systemic examinations were unremarkable, and upon evaluation, the uterus was found to be at approximately 14–16 weeks of gestation. No other abnormalities were detected.Laboratory investigations showed raised Beta hCG (2,56,721 mIU/ml). The rest of the biochemical parameters were within normal limits.

A transabdominal scan (TAS) at 13 weeks of gestation at our hospital confirmed the findings of a live fetus with a normally appearing placenta in one sac and an adjacent mixed echogenic mass giving snow storm appearance (figure 1). The live fetus had no gross congenital anomalies with heart rate of 153 bpm (figure 2). Intrauterine amniotic fluid volume was normal with no oligohydramnios. Placenta was fundal, with lower end not reaching up to internal OS. Bilateral ovaries were bulky. For further detailed evaluation, MRI pelvis was done. It revealed twin pregnancy with single gestation sac and complete hydatidiform mole (figure 3 and 4). It demonstrates fetus in right half of uterus and heterogeneous but predominantly T1 hypointense and T2 hyperintense cystic mass in the left half of the uterus. No fetal parts were present in the latter suggestive of complete molar pregnancy. The molar pregnancy completely covered the internal OS (figure 5). The lower uterine segment is completely occupied by the molar mass displacing the fetus superiorly. No myometrial invasion was seen. No diffusion restriction was present to demonstrate any malignant transformation. Placenta was fundal extending posteriorly without signal changes. No myometrial invasion was seen with maintaining myometrial interface. Bilateral ovaries were bulky with few theca lutein cysts.

Twin pregnancies consisting of complete hydatidiform mole coexisting with a normally developing fetus are exceedingly rare, estimated at one in 20,000–100,000 pregnancies [1]. Complete hydatidiform molar pregnancy is a premalignant condition typically resulting from the anomalous fertilization with diploid expression of the paternal genome and is characterized by trophoblastic hyperplasia and abnormal chorionic villi. The risk of persistent trophoblastic disease in twin molar pregnancy is more than a single complete mole. Hydatidiform moles can become invasive and malignant. Metastasis can also be seen in half of the malignant cases. Apart from maternal complications, the risks to the fetus include pre-term labour, fetal growth restrictions and intrauterine fetal demise. Clinical & Imaging findings: The diagnosis of a twin molar pregnancy is clinically challenging. Patients with molar pregnancy commonly present in the first or second trimester with vaginal bleeding, rapid uterine enlargement, hyperemesis gravidarum or pre-eclampsia. Ultrasound is first and best modality of choice. Usually uterus is enlarged and shows liver fetus and ill-defined echogenic mass/ vesicles giving snow storm or bunch of grapes appearances. This condition needs to be differentiated from a partial hydatidiform mole where there is visualization of fetal parts. MRI is essential to confirm as well as differentiate from a placental mesenchymal dysplasia, because the perinatal prognosis is favorable in the latter. The molar mass appears as T2 hyperintense tiny cysts causing expansion of endometrial cavity. The main indication is to rule out myometrial invasion and extension into the parametrium which suggests invasive gestational trophoblastic tumor. If pregnancy is decided to continue, it helps in management of pregnancy by estimating the exact anatomical relationship of the mass and developing fetus. Treatment and prognosis The suspected or confirmed diagnosis of a twin pregnancy with a hydatidiform mole can lead to two strategies: elective termination of pregnancy due to the high risk to the mother, or comprehensive prenatal care in a Referral Center for gestational trophoblastic disease. A recent study on the predictors of fetal survival and taking home baby found that hCG levels up to 400,000 IU/L are the best indicators for a favorable perinatal outcome [4]. Patients undergo dilatation and suction curettage/ surgery. Chemotherapy follows until beta-hCG levels return to normal. Methotrexate or actinomycin B is often given. All patients are followed up with beta-hCG measurements to ensure the disease is in remission [5]. Differential diagnosis The main differential diagnosis of this condition is placental mesenchymal dysplasia, characterized by the presence of placentomegaly with multiple prominent cysts oriented perpendicularly to the choroidal plaque, without atypical trophoblastic proliferation [3]. MRI showed that the twin pregnancy with a

Diagnosis of twin pregnancy with a complete hydatidiform mole and live fetus is rare and challenging. The complications and outcomes has to be explained to the patient for deciding further management. Ultrasound is the first and best modality of choice for investigation. However, it is limited due to less field of view and operator dependent. MRI pelvis gives excellent soft tissue and anatomical details. In addition to interdisciplinary management, preparedness for all outcomes in an optimally equipped operative room at the time of delivery and aggressive resection of the hydatidiform molar tissue is imperative. 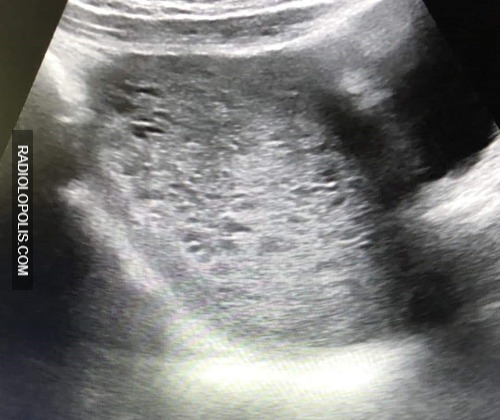 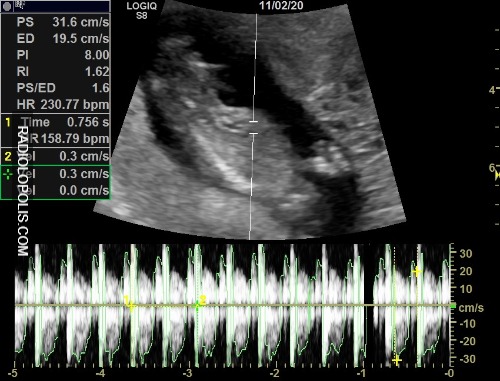 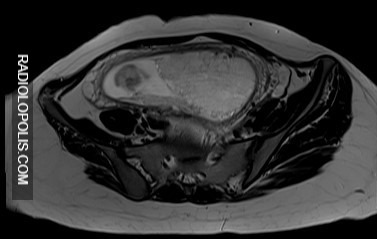 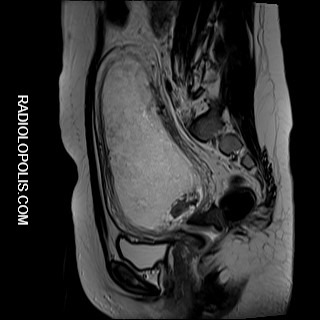