A generally healthy 23 years old woman, with family history of colon cancer, presented to our emergency room (ER) with complaints of right lower quadrant abdominal pain and diarrhea. She underwent physical examination and abdominal ultrasound (US) that did not reveal any evidence of acute appendicitis. The blood tests have shown increased CRP of 53 mgL (normal 0.03-5 mgL) without leukocystosis. She was discharged with a diagnosis of gastroenteritis and antibiotic treatment. After 5 days the abdominal pain became constant and worse, so she returned to the ER. Physical examination revealed a generally distended abdomen, no obvious palpable masses and no signs of peritonitis. The blood tests showed increased CRP of 42.8 mgL, again without leukocytosis or any other abnormality. A gynecological US was performed and revealed a well-defined solid mass measuring 44 * 39 mm to the left of the uterus. The solid mass was heterogeneous with avid flow on Doppler images (figure 1). An abdominal computed tomography (CT) scan with parenteral and intravenous contrast materials was performed and confirmed the presence of a mass in the ileum causing small bowel obstruction (figure 2). There were no other acute findings in the abdominal or pelvic organs. Based on the CT findings, the patient underwent an urgent small bowel resection. On laparotomy, a large tumor with prominent vascularity was found to arise from the distal ileum. There was no evidence of metastasis. The mass was resected, along with involved sections of the small bowel, and a primary small bowel anastomosis was performed. There were no postoperative complications.

*Etiologydemographics The first description of IMT was in 1937 as a lung tumor predominantly appearing in pediatric patients and young adults. The World Health Organization (WHO) classified the IMT as a fibroblastic/myofibroblastic neoplasm of intermediate biologic potential because of its potential for invasion of surrounding structures and development of local recurrence and distant metastases. There are several different names for IMT including: inflammatory pseudotumor, plasma cell granuloma, fibrous histiocytoma, solitary mast cell tumor, and fibroxanthoma. The factors responsible for the development of IMT are still not clearly established. IMT may represent an immunologic response to an infectious or noninfectious agent, or it may be a true tumor. Campylobacter jejuni, Epstein-Barr virus, and Escherichia coli have been associated with IMT. Also, trauma, steroid use, abdominal surgery, and genetic factors have been reported, but the pathogenesis of IMT remains unclear. *Clinical & imaging findings Presenting symptoms depend on the involved primary site. As mentioned before, the lung is the most commonly affected site, but extra-pulmonary IMTs may include the mesentery-omentum, upper respiratory tract, genitourinary tract, retroperitoneum, neck, spleen, brain, pancreas, liver, and the intestines. Patients with intra-abdominal IMTs most commonly present with intermittent abdominal pain due to the solid mass and abdominal distention, weight loss, malaise, anorexia, and vomiting. Rarely, the presentation may be complicated by an intussusception, acute abdomen mimicking acute appendicitis or intestinal obstruction as was the case in our patient. Laboratory abnormalities are present in a minority of the patients and include anemia; increased CRP, as in our patient; and sometimes thrombocytosis. Leukocytosis is rare. *Pathological examination The tumor was non-encapsulated and infiltrative (figure 3), showing alternating hypocellular areas with myxoid background and hypercellular fascicular areas with a collagenous background. The tumor cells were uniformly spindle, showing scant to moderate pale eosinophilic cytoplasm with a round to elongated bland nuclei and conspicuous nucleoli. Prominent lymphoplasmacytic infiltrate with minor polymorphonuclear cells component was also identified. Mitotic rate was low (4/10 HPF) and no tumor necrosis identified (figure 4). On immunohistochemistry, the tumor cells were negative for ALK, Keratins, c-kit, DOG1, STAT6, beta-catenin, S100, and Desmin, and showed immunoreactivity solely for Smooth-Muscle Actin, Vimentin, and ROS1 (figure 5). Molecular pathology studies had been performed by a targeted next-generation sequencing (NGS) based assay, for the detection of gene fusions from formalin-fixed paraffin-embedded (FFPE) tissues. A FN1-ROS1 fusion (chr2:216256355,chr6:117650609) was identified using the FusionPlex Sarcoma NGS Panel (Archer Dx, Boulder, CO.), based on a modified amplicon appro

Teaching point IMT is a solid tumor that can rarely present in a young adult as acute abdominal pain with bowel obstruction. A precise diagnosis should be based on histological findings, and complete surgical resection is necessary. Clinical and laboratory follow-up is mandatory due to increased risk of local recurrence. 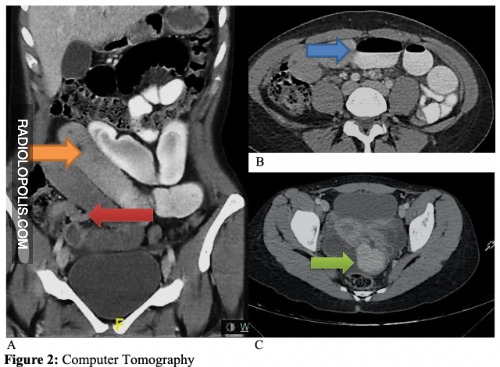 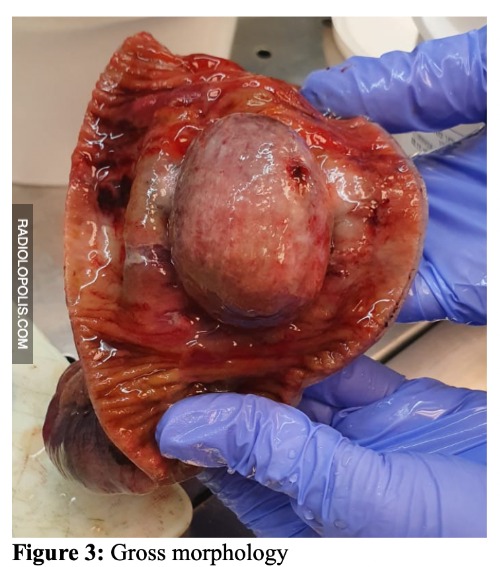 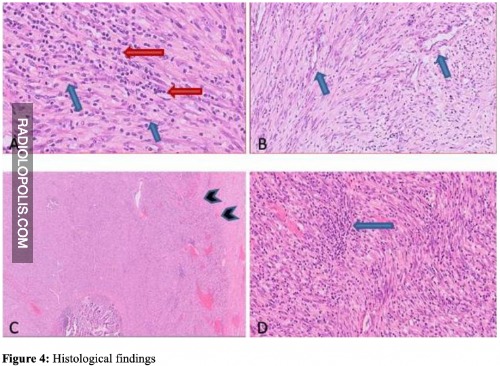 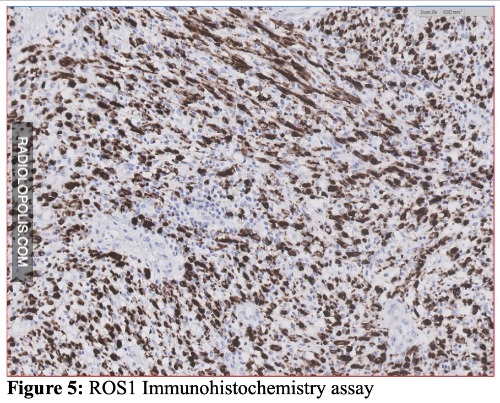