A rare case of spontaneous remission of diffuse midline glioma in an infant. 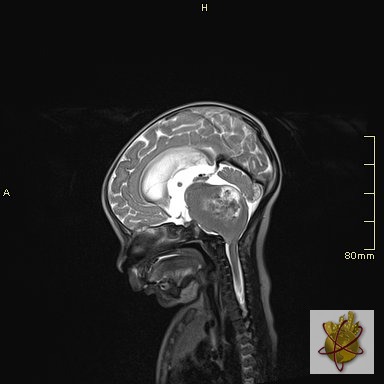 A rare case of spontaneous remission of diffuse midline glioma in an infant.

A one-week-old girl, born at term after an uncomplicated pregnancy, presented with muscular hypotonia and feeding difficulties.

MRI of the brain revealed a large diffuse lesion expanding the pons reaching the left midbrain showing hypointense signal on T1 weighted images, hyperintense signal on T2 weighted images, areas hemorrhage and foci of heterogeneous enhancement following intravenous contrast administration with internal cystic necrosis. It demonstrated as well areas of restricted diffusion. There is secondary posterior mass effect on the cerebral aqueduct with proximal hydrocephalus of third and fourth ventricles . A ventriculoperitoneal (VP) shunt was inserted resulting in improvement of neurologic symptoms. No biopsy was taken at the time and no chemotherapy or radiation regimen given. The patient presented to our center at the age of 23 months to follow up on the progression of her disease, despite being completely symptom free. On physical exam, no abnormalities were noticed except for a mild spasticity in her right arm. Repeat MRI showed near resolution of as compared to the MRI findings at initial diagnosis. There is persistence of a small non enhancing cystic area along the left lateral aspect of the pons.

Our findings in this case report are consistent with spontaneous remission of diffuse pontine glioma and this was noticed on the follow-up imaging which showed no evidence of residual tumor. Radiological findings as well as clinical symptoms are often sufficient to establish the diagnosis of a diffuse intrinsic pontine glioma. Hence, we elected to save the patient a biopsy procedure with all its risks, especially that the tumor was spontaneously regressing. The classic imaging appearance of a pediatric diffuse midline glioma is a large, expansile, asymmetric mass, exhibiting hyp intense signal on T1 weighted images, hyperintense signal on T2 weighted images with minimal to no enhancement on the post contrast images. It has the propensity to involve midline structures notably the hypothalamus, tectal plate, pineal region as well as the third ventricle. The margins of the tumor are usually indistinct with excessive swelling of the pons, as seen on the initial MRI done in our patient. As of differential diagnosis, an infectious etiology is extremely unlikely due to lack of significant contrast enhancement as well as non- relevant clinical picture. Furthermore, central pontine myelinolysis is also another possibility that we should be included in the differential diagnosis. However, this diagnosis is rare in infancy and must be included in case of a history of electrolyte imbalance which was not present in our case. Note that, in most cases of diffuse midline glioma (formely known as DIPG), biopsies reveal the classic histologic features of a high-grade astrocytoma. The histopathologic grade of diffuse gliomas does not correlate with prognosis, as a low-grade lesion can be as fatal and as rapidly progressing as a high-grade one. Over the past several years, major advances have been made in understanding the molecular biology of DIPG. Around 80% of studied biopsies revealed mutations in genes encoding histone protein H3 (H3F3A and HIST3BHI genes). In particular, the H3 K27M mutation (a substitution of lysine 27 to methionine) has been recently added as a new diagnostic entity in diffuse glioma in the 2016 World Health Organization (WHO) classification of brain tumors. Other important genetic changes include recurrent somatic mutations in ACVR1 gene, mutations targeting receptor tyrosine-kinase-RAS-PI3K signaling, cell cycle regulation, etc. There is also a rare congenial subset of DIPG, whose molecular features had been largely unknown due to its rarity and lack of biological material available for study. Our patient did not receive any treatment on diagnosis, except for the VP shunt that helped in a complete resolution of her symptoms. Chemotherapy and radiation therapy were deemed unhelpful in altering the disease progression by the medical team. When patient presented symptom-free to our center for follow up and imaging showed spontaneous regression of the tumor, pediatric oncologists had two options: keep on conservative treatment and do imaging s 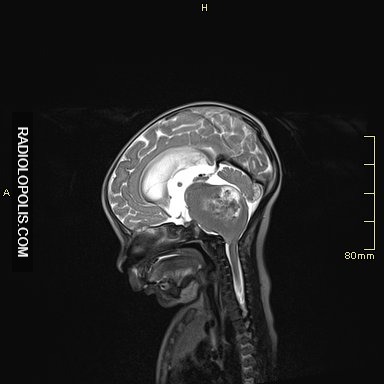 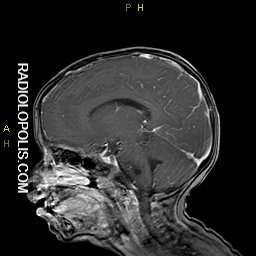 Diffuse midline glioma post follow-up with no treatment in the interval.