IgG4 aortitis of the ascending thoracic aorta: a case report and literature review

IgG4 aortitis of the ascending thoracic aorta: a case report and literature review

A 60-year-old female was transferred from another facility for tertiary care with a diagnosis of intramural hematoma involving the ascending aorta. Her past medical history was significant for hypertension, hyperlipidemia, type II diabetes mellitus, hypothyroidism, obesity and history of deep venous thrombosis on Eliquis. Upon admission to our facility, the patient had stable vital signs with chief complaint of shortness of breath, cough, and congestion.

The patient underwent an emergent computed tomography angiogram (CTA) of the thorax, abdomen and pelvis which demonstrated an ascending aorta measuring 4.7 cm (Fig. 1A), with the inner lumen measuring 3.3 cm (Fig. 1B). In addition, the non-contrast CT thorax (Fig. 2A) and the post contrast CTA thorax (Fig. 2B) demonstrated concentric wall thickening of the ascending aorta with adjacent fat stranding. There was an additional area of involvement of the infrarenal aorta and proximal right common iliac artery with similar imaging characteristics as the ascending aorta (Fig. 3A-C). No crescentic hyperdensity was seen in the involved aortic segment on non-contrast images (Fig. 4). A cardiac catheterization did not reveal obstructive coronary artery disease. Due to her acute presentation and concern for rupture of the ascending aortic aneurysm, patient underwent median sternotomy for repair of the ascending aorta utilizing a hemiarch with Hemashield graft. Intraoperatively, the aortic root demonstrated concentric wall thickening with dense white fibrosis and adhesions (Fig. 5A-B). No intramural hematoma was seen. Patient was monitored for 5 days post-operatively and the hospital course was otherwise uneventful. A repeat CTA thorax, abdomen and pelvis revealed expected postoperative changes and the patient was later discharged for outpatient follow-up. Patient’s lab work at the time of admission indicated normal serum IgG4 level of 0.3% (normal range 0.0-0.5%), and erythrocyte sedimentation rate of 13 mm/Hr (normal range 0-30). There was mild elevation of C-reactive protein of 1.50 mg/dL (normal range 0.00-0.50).

IgG4-related disease is a systemic condition that can have nonsynchronous or simultaneous involvement of multiple organs. IgG4-related sclerosing disease (IgG4-RSD) is a well described diagnosis involving autoimmune pancreatitis, in addition to involvement of salivary gland, thyroid, mediastinum, heart, kidneys and the retroperitoneum [1,2]. Few studies and case reports have described IgG4 related aortitis of the abdominal aorta, and even fewer case reports have been published on thoracic aortitis. IgG4 aortitis was first defined by Kasashima and colleagues in 2008 as a primary suspect in inflammatory abdominal aortic aneurysm (IAAA) [3]. Although the exact pathophysiology of IgG4 aortitis remains to be elucidated, Kasashima and colleagues (2018) proposed an inflammatory pathway that activates the T helper cells resulting in release of various cytokines, plasma cell infiltration and fibrosis [4]. The ‘outside-in’ theory suggests that the activated T-helper cells attract IgG4-positive B lymphocytes to the adventitia, which later differentiate into plasma cells [5]. The plasma cell infiltration of the adventitia can result in destruction of aortic wall elasticity and remodeling of the periadventitia via aggregation of cytokines and growth factors, eventually leading to a weakened wall that can predispose to aneurysm [4-6]. Risk of aneurysm increases when the inflammation extends to involve the media and lamellar elastic fibers [6,7]. On the gross specimen, the aorta demonstrates a bluish or whitish tinge superficially and is firm to palpation, which was seen in our patient upon initial incision (Fig. 6A) [8,9]. Histologically there is lymphoplasmacytic infiltration with storiform fibrosis as a dominant component, obliterative phlebitis, IgG4/IgG positive plasma cell ratio ≥ 40% and IgG4 positive plasma cell count >10/hpf (high power field) as seen on immunohistochemistry [1-10]. On imaging, CTA demonstrates soft tissue thickening of the outer aortic wall, which can occasionally be mistaken for acute aortic syndrome such as intramural hematoma due to its overlapping appearance [1,4,10]. Diagnostic criteria suggested based on findings described for IAAA by Kasashima and colleagues (2018) may be extended to diagnose IgG4 aortitis due to similar pathophysiology. The criteria include (a) - hypertrophic lesion of the arterial wall on imaging findings, (b) - increased serum IgG4 (>135mg/dL) and (c) - histopathological findings as described earlier. It is a definitive diagnosis if all three criteria are present. It is semi-diagnostic if (a) and (c) are present and suspected if (a) and (b) are present [4]. Difficulty in performing a biopsy and obtaining a pathology specimen of the aorta due to its location can make the diagnosis of IgG4 aortitis challenging. However, the diagnosis can be made in the presence of multifocal or multi-organ involvement and elevated IgG4-levels, which is >90% sensitive [4].

Imaging diagnosis of IgG4 aortitis can be challenging, especially in the absence of fitting clinical presentation or diagnosis. However, it is the role of a radiologist to recognize these imaging characteristics and to raise the possibility of an alternative diagnosis to expediate appropriate clinical management. 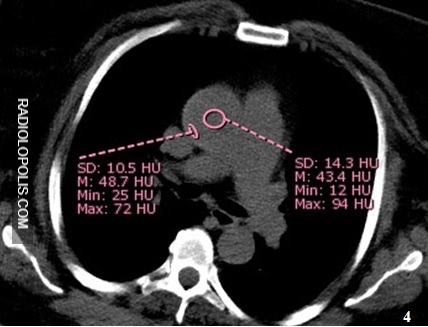