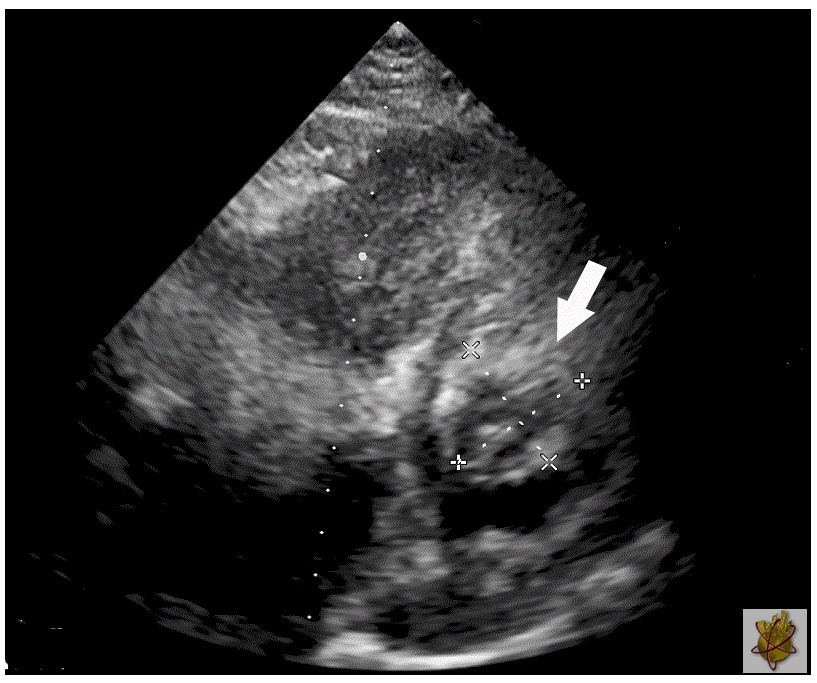 A 49-year-old man presented to an outside hospital with intermittent chest pain and distress of one-month duration. At echocardiography, left ventricular diastolic function was decreased and a mass was detected in right ventricle. Then, the patient presented to our hospital for further treatment. Physical examination was no remarkable. No abnormal findings were revealed by blood routine test, cardiac biomarkers or brain natriuretic peptide.

Transthoracic echocardiography (TTE) revealed the presence of an oval mass (3.6 x 3.3 cm) with heterogeneous echo in right ventricle (Figure 1). The obstruction of right ventricular (RV) outflow tract was not discovered. The retrospective electrocardiogram (ECG)-gated CT scan showed a round well-circumscribed mass (3.5 x 3.4 x 3.6 cm) with heterogenous attenuation attached to the free wall of the right ventricle. There were some cystic changes, fatty tissue, soft tissue and patchy calcifications in intracardiac mass. The soft tissue part of the mass demonstrated moderate enhancement, whereas the cystic part or fatty tissue presented no enhancement (Figure 2). The mass had well-defined borders and complicated components, attachment to the free wall of the right ventricle. The surface of mass was hyperintense on T1-weighted (T1W) images, and lower signal on fat-suppressed T2-weighted (FST2W) images, long T1 and short T2 value in native T1- and T2-mapping, suggestive of fat tissue. The center of mass was hyperintense on both T1W and FST2W images, short T1 and long T2 value in native T1- and T2-mapping, consistent with viscous cyst fluid (Figure 3 and Figure 4). On rest perfusion imaging, the mass demonstrated peripheral continuous progressively increasing enhancement after gadolinium-based contrast agent was administrated intravenously. The mass presented a markedly peripheral rim enhancement at 10 minutes delay, which was also confirmed by a shortened T1 value detected by post-enhanced T1-mapping. Left ventricle demonstrated abnormal patchy fibrosis, whereas no obvious fibrosis was detected in right ventricle (Figure 4 and Figure 5). Right and left ventricular size and systolic function reserved in normal range. Histologically, smooth muscle, fatty tissue and nodular calcification were observed without cartilage (Figure 6). The diagnosis is a bronchogenic cyst.

Bronchogenic cysts are benign congenital tumor due to abnormal budding of the primitive ventral foregut during embryologic development, and usually involve the tracheobronchial tree. Besides the mediastinum and lung, bronchogenic cysts rarely occur inside the heart. The cardiac primordia are close to the foregut, where abnormal buds may rarely migrate to the myocardium as a source of intracardiac cyst. The right side of the heart was the most frequent position of intracardial bronchogenic cyst. Intracardiac bronchogenic cysts are extremely rare and mostly asymptomatic, being detected incidentally, usually in the second to fourth decades. The aim of this case report is to use multiple imaging modalities including TTE, CT and MR to present imaging features of bronchogenic cysts. TTE is usually the preferential selection in the detection of cardiac tumors, providing accurate description of tumor location, size, mobility, point of attachment and hemodynamic relevance. Intracardiac bronchogenic cysts usually contain simple fluid with very thin wall and mostly locate in the right side of the heart. However, echocardiography is an operator-dependent modality, which may restrict its diagnostic accuracy. Cardiac CT can not only show the characteristics of tumor, but also show the relationship between tumor and surrounding structures. Bronchogenic cyst usually appears as a non-enhanced cystic lesion with very thin wall and homogeneous lower density. However, bronchogenic cyst has occasionally heterogeneous density when tumor contains calcification, fat, or other protein content. For this type of bronchogenic cyst, cardiac CT and MR are useful to demonstrate complicated components in the mass. Cardiac MR providing significant morphological information with good spatial resolution, is the preferred method for the comprehensive assessment of cardiac tumors, and contributes to distinguish between benign and malignant cardiac tumors and guiding clinical diagnosis and treatment. Furthermore, MR is possible to make a distinction between bronchogenic cysts and other soft tissue masses. In general, MR signal intensity characteristics of bronchogenic cysts depend on internal composition, it is mainly hypointense on T1W images, hyperintense on T2W images and no overt enhancement after application of contrast materials. Nevertheless, some bronchogenic cysts are hyperintense on T1W images, which suggest bleeding, proteinaceous, or viscous components. To avoid serious complications, such as cardiac tamponade, acute pericarditis, and pericardial effusion, surgical resection is highly recommended. 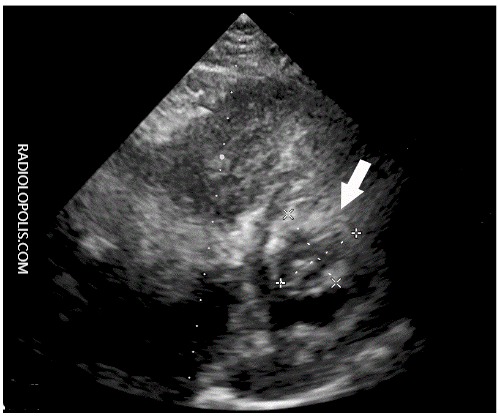 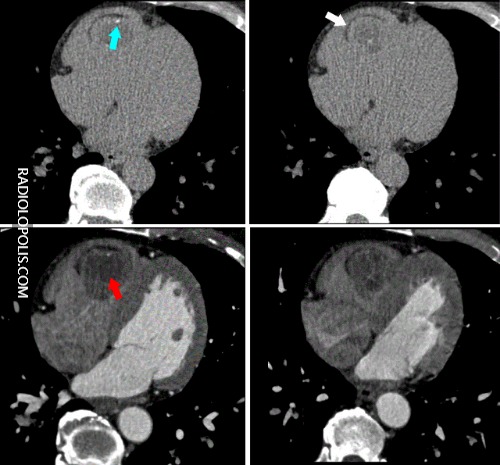 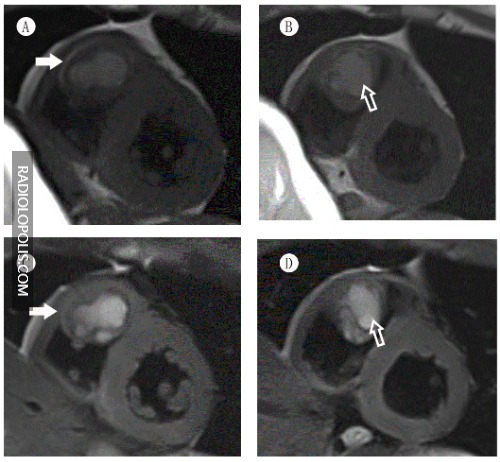 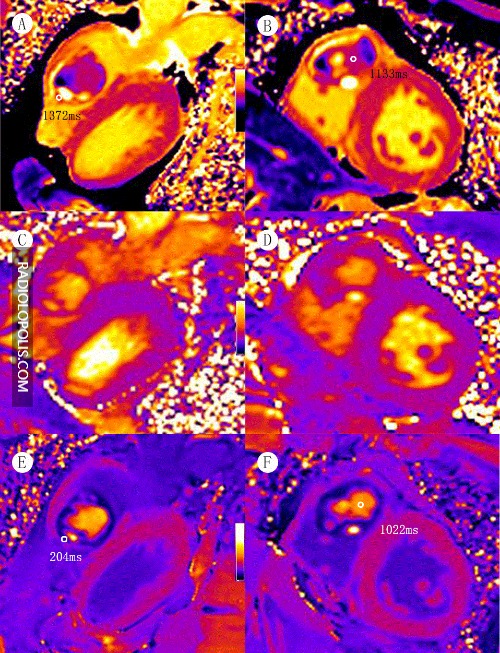 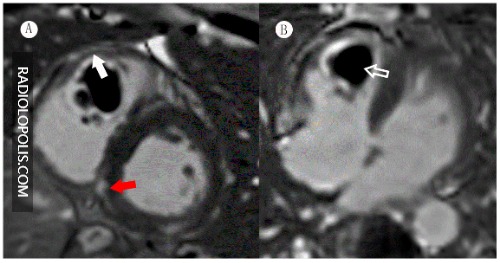 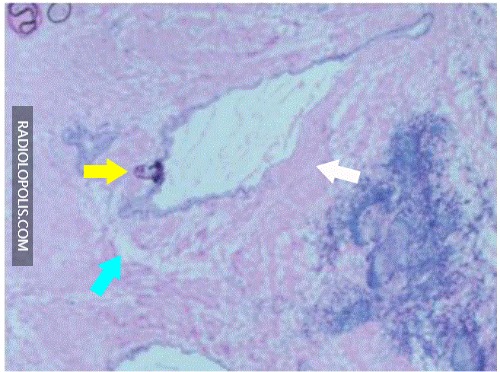