Portable chest X-ray demonstrated complete absence of lung parenchyma within the left hemithorax and significant rightward shift of the mediastinum, highly concerning for possible tension pneumothorax (Figure 1). However, review of available prior CT imaging demonstrated the presence of a large preexisting left diaphragmatic hiatal hernia. This prompted further assessment with repeat CT scan of the chest rather than empirical treatment by chest tube placement. The subsequently performed CT chest revealed significant gas within the left hemithorax with near complete collapse of the left lung and contralateral mediastinal shift, again, seemingly indistinguishable from a large tension pneumothorax (Figure 2A). However, further inspection demonstrated that the left hemithoracic air was in fact contiguous with a bowel loop (Figure 2B-C), which could be traced inferiorly as duodenum. Therefore, the diagnosis of tension gastrothorax was made. Prompt decompression via a nasogastric tube was subsequently achieved and repeat chest x-ray showed resolution of the dilated intrathoracic stomach with associated re-expansion of the left lung (Figure 3). She was later evaluated by Thoracic surgery and it was determined that the patient’s underlying cardiopulmonary comorbidities precluded her from undergoing definitive surgical repair and she was subsequently discharged with initiation of palliative care.

Tension gastrothorax refers to a rare clinical condition in which a herniated intrathoracic stomach becomes significantly distended by trapped air, leading to respiratory distress, mediastinal shift, and hemodynamic compromise. The presence of a diaphragmatic defect serves as a prerequisite for the condition and thus cases are typically seen in the pediatric population with congenital diaphragmatic defects or later in life with acquired defects, most commonly in the setting of trauma. However, cases involving enlarging hiatal hernias as well as secondary to post-surgical complications have also been reported. Mechanistically, gastrothorax develops when increased intraabdominal pressure (i.e. blunt trauma, Valsalva maneuver, etc.) forces the stomach into the thorax through the diaphragmatic defect. Accumulation of gastric contents such as air, fluid, or food into the abnormally positioned and angulated gastroesophageal junction functions as a one-way valve leading to increased intrathoracic pressure. Similar to tension pneumothorax, this causes progressive mediastinal shift that can lead to respiratory failure, obstructive shock, and cardiac arrest. In addition to its mechanistic similarities, there is also significant overlap in clinical presentation and radiographic findings to that of tension pneumothorax making this entity particularly challenging to diagnose.

Several key radiographic features are useful for distinguishing a gastrothorax from a tension pneumothorax. These include: lack of the normally seen gastric bubble, poorly defined left hemidiaphragm (inferiorly displaced and readily identified in cases of tension pneumothorax), and/or the presence of an air-fluid level within the left hemithorax. The diagnosis of tension gastrothorax is best evaluated on cross-sectional imaging such as CT however, the feasability of performing CT imaging is largely dictated by the patient’s hemodynamic stability and may not be an option in some emergent situations. Prior imaging studies are an invaluable resource that should always be reviewed and scrutinized when available. Additionally, in cases where there is question regarding the certainty of a particular diagnosis, Radiologists should have a low threshold to recommend further evaluation with additional imaging and/or discuss their concerns with the ordering clinician as hasty insertion of a chest tube in misdiagnosed cases can lead to viscous or vascular injury with potentially catastrophic consequences. Lastly, while CT imaging is considered the gold standard, thoracic ultrasound has been shown to be more sensitive than traditional chest radiograph and has the added advantage of being available for use at point-of-care, and thus can be useful for troubleshooting in equivocal cases. Visualization of pleural sliding on lung ultrasound corresponding to the movement of the visceral pleura on the parietal pleura during respiration is the most important sonographic finding in normal aerated lung and effectively rules out the diagnosis of pneumothorax. Once the diagnosis has been made, prompt decompression of the stomach via nasogastric tube is the recommended initial treatment followed by surgical repair of the diaphragmatic defect, once stabilized. 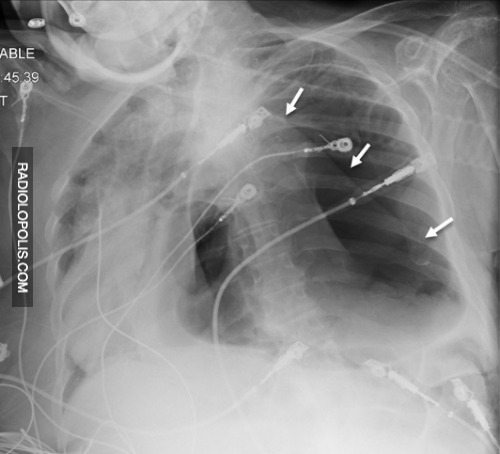 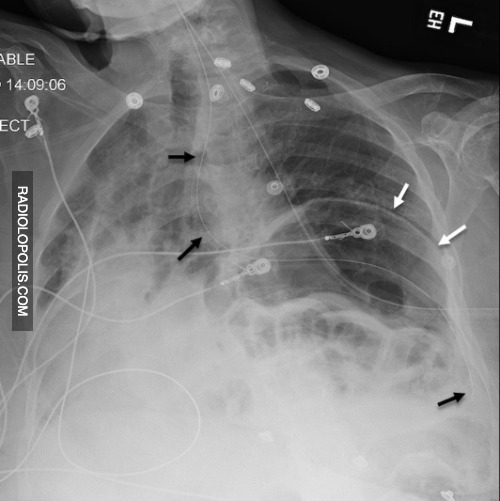