Multilevel “fish-vertebra” sign in a patient with idiopathic osteoporosis 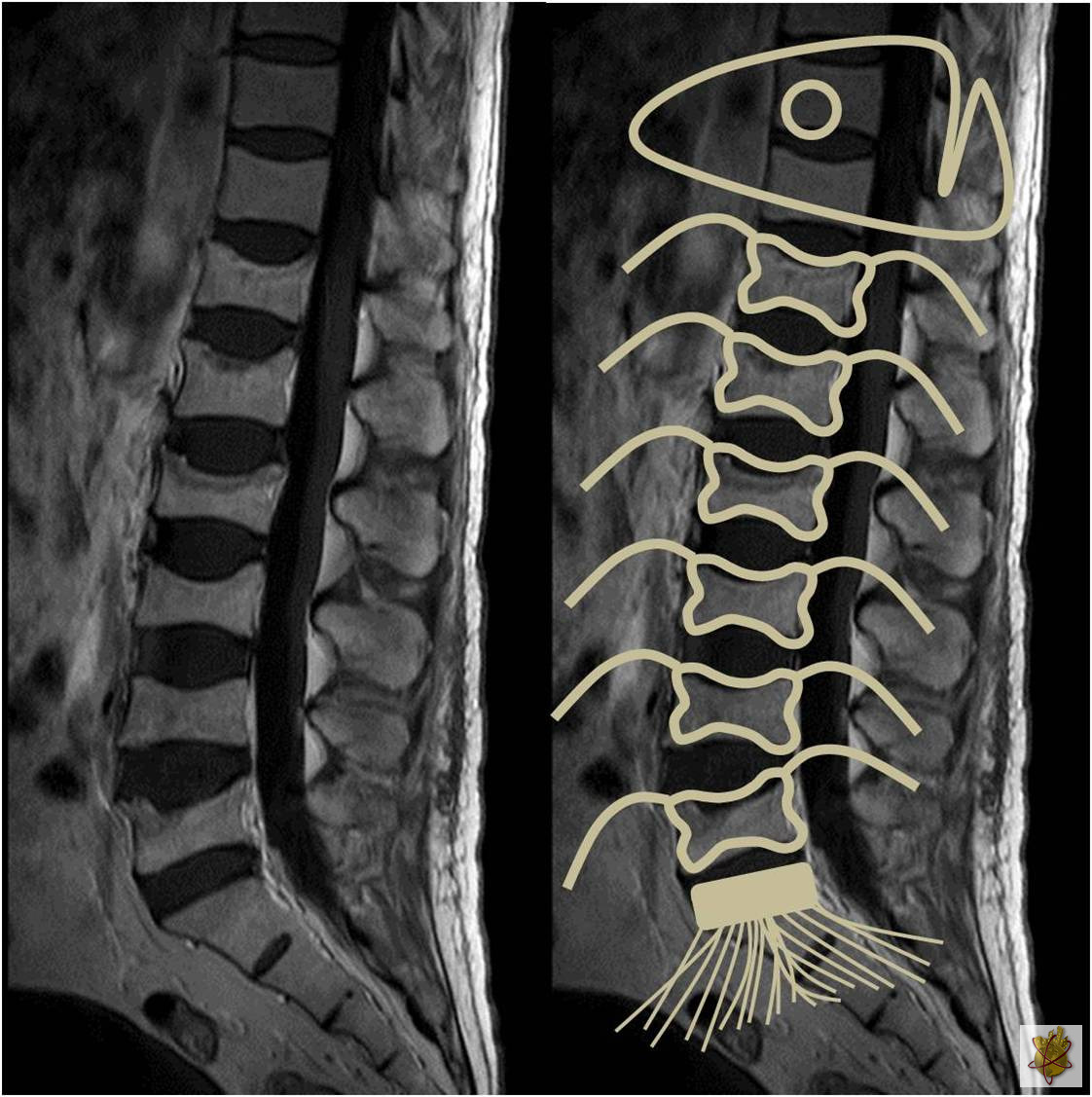 Multilevel “fish-vertebra” sign in a patient with idiopathic osteoporosis

A 50-years-old male with a history of waist and lower back pain for over a year who initially treated with non-steroidal anti-inflammatory drugs (NSAIDs), modification on activities of daily living and physical therapy protocols-exercises presented to our department. A thorough history revealed that he was employed in an environment with work related musculoskeletal disorder risks, with no significant prior traumatic medical or surgical experience and medication history (free history of previous long-term corticosteroid drugs). The pain had increased during the last 4 weeks without any remarkable improvement in symptoms after a combination of NSAIDs and opioid drugs. His pain was more intense when bending forward and was relieved on recumbent position. Neurovascular examination was normal.

An initial blood-test investigation at the admission site was performed and everything was normal (Table 1). Plain radiograph of the thoracolumbar revealed a symmetrical biconcave deformity of all the vertebral bodies from T12 to L5. Magnetic resonance imaging (MRI) of the thoracolumbosacral spine was ordered and confirmed the “fish-vertebra” sign of the lumbar vertebral bodies (Fig. 1). Dual-energy X-ray absorptiometry (DEXA) revealed a T-score of −3.9 at the spine. The patient underwent uncomplicated kyphoplasty and he went home the following day without complications. Biopsies from vertebral bodies were negative for malignancy and the diagnosis of idiopathic osteoporosis was made. The patient was treated with teriparatide. During a six month follow-up the patient was almost pain free and he had returned back to his work.

In the past few years, osteoporosis in men has been recognized as a major public health issue and its prevalence was increasing with the aging of the population [1]. The term idiopathic osteoporosis is used to describe the disorder of low bone mass and microarchitectural bone deterioration without associated hypogonadism in children, younger men or premenopausal women, that may lead to bone fragility and subsequently to a fracture (most commonly in the hip or spine) [2]. Diagnosing an osteoporotic vertebral fracture is more challenging because the majority of them are not commonly associated with back pain. It is estimated that approximately 60% of patients with an osteoporotic vertbebral fracture are asymptomatic [3, 4]. Many vertebral fractures are noted incidentally as a vertebral anomaly on radiographs, so their true incidence is difficult to ascertain and thereby often underestimated [3]. The term “fish vertebrae” was first described by Fuller Albright in 1941 in postmenopausal women because of their similarity to the shape of fish vertebrae. Seven years later, he and his colleague Edward Reinfenstein used the term “codfish vertebrae” in order to clarify the fish vertebrae corollary with the biconcave vertebral body deformity encountered in postmenopausal osteoporosis [5]. This uncommon structural vertebral anomaly of body shape has been associated with various conditions, such as osteoporosis, osteomalacia, hyperparathyroidism, Paget disease, sickle cell disease, multiple myeloma and systemic lupus erythematosus [6]. Furthermore, vertebral fractures due to osteomalacia in adults are demonstrated as a biconcave deformity of the vertebral endplates and are similar to those encountered in osteoporosis [5, 6]. Other typical radiological findings in association with benign vertebral body in spine collapse including the “H-shaped” vertebrae on coronal and sagittal imaging in sickle cell disease [7]. This type of deformity, also known as Lincoln log vertebrae, is visualized as a sharply delimited central endplate depression due to microvascular endplate infarction and it can also be found in thalassemia and spherocytosis [7, 8]. Lastly, infection of the spine can be caused by bacterial, fungus and/or tuberculosis and reveal extensive endplate vertebral body erosion and destruction [9]. The most sensitive imaging technique is the MRI, which can also define the severity and extent of the destruction and whether it involves the spinal canal [5, 6, 8]. The decision to treat a patient with idiopathic osteoporosis should be based on physical examination, diagnostic tests, fracture risk assessment and bone mineral density (BMD) measurements [1]. Treatment options may include pain relief, lifestyle modifications to prevent bone loss and decrease the risk of falls and specific treatment to enhance BMD and reduce the incidence of fractures [2]. The treatment consists of both non-pharmacological and pharmacological intervention. It is well known that life

The “fish-vertebra” sign is a smooth deformity of the vertebral bodies, with a characteristic biconcave body occurring due to a squared-off depression of the vertebral end-plates and compression by adjacent intervertebral discs. This radiologic sign can be seen in osteoporosis, osteomalacia, hyperparathyroidism, Paget disease, sickle cell disease, multiple myeloma and systemic lupus erythematosus. 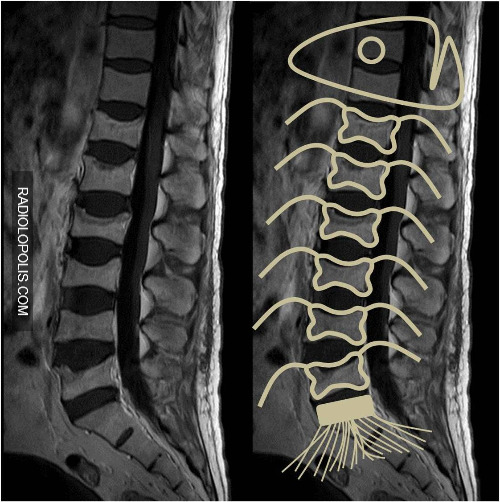 Sagittal T2-weighted MRI of the thoracolumbar spine resembling the characteristic “fish-vertebra” sign. All the vertebral bodies from T12 to L5 show the biconcave vertebral body deformity of their endplates, with different signal intensities of their bone marrow and loss of more than 30% of the vertebral height.