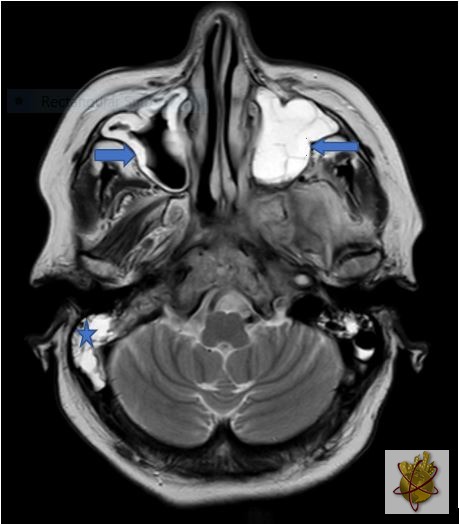 A 56-year-old lady with type 2 diabetes mellitus had history of COVID pneumonitis 2 months back. She presented with shortness of breath and fever. There were extensive peripheral subpleural ground glass opacities in both lung fields with CT severity score of 18 for which she was hospitalized and got treated with remidesivir, oxygen supplementation and antibiotics and recovered eventually, got discharged. After 22 days she developed nasal stuffiness and foul smelling nasal discharge. CT and MRI of paranasal sinuses demonstrated extensive mucosal thickening in both maxillary sinuses, retroantral space, pterygomaxillary fissure, left sphenoid sinus with altered marrow signals in pterygoids, body of sphenoid and clivus- invasive fungal sinusitis. She underwent FESS during which left uncinectomy, uncapping of haller cells, ethmoidectomy, instillation of Amphotericin into sinuses was done. Culture revealed mucormycosis. After 5 days she had left eye congestion, restriction of movements and diminished vision for which she got a follow up MRI orbits, paranasal sinuses and brain with contrast in our department. Paranasal sinuses revealed the same findings as earlier, but in addition to these, there is associated left cavernous sinus thrombosis with eventual thrombosis of cavernous and petrous part of left ICA with acute infarct in left capsuloganglionic region and left ophthalmic artery thrombosis. The patient is now being managed conservatively.

Coronavirus disease 2019 (COVID-19), caused by the novel severe acute respiratory syndrome coronavirus 2 (SARS-CoV-2), is the leading cause of an emergency global pandemic. Besides the Acute Respiratory Distress Syndromes (ARDS) caused by it, COVID-19 patients were found to have immune-suppression attributed to a decrease in CD4+T and CD8+T cells. This results in a diverse bacterial and fungal infections that may co-exist with possible association with a pre-existing morbidity (diabetes mellitus, lung disease) or may develop as a hospital-acquired infection. Standardized definition of AIFR includes presence of tissue invasion by fungal elements over an acute clinical course of less than 4 weeks. Acute invasive fungal rhino-sinusitis (AIFR) is a potentially fatal infection that is notably found in immune-compromised patients (malignancy, uncontrolled Diabetes, AIDS, chemotherapeutic drugs) and considered the most aggressive subtype of fungal sinusitis with subsequent serious morbidity and mortality. This entity can be attributed to COVID 19 infection if the fungal rhinosinusitis sets in within a period of 4 weeks after COVID infection. Acute onset fever, nasal stuffiness, headache, facial pain, numbness and visual loss were the most common symptoms and signs. On examination Proptosis, diplopia, nasal congestion, attenuated visual acuity and some with palatal necrosis. The patterns range from mucosal thickening of the involved sinus mucosa to osteomyelitis of the related bone. The most commonly involved sinonasal site is lateral nasal wall with ethmoid and sphenoid sinuses being the most commonly affected. Orbital involvement usually is associated with either subperiosteal abscess or extension of inflammation with symptoms of orbital apex syndrome or orbital cellulitis with compression of orbital contents. Some of them may complicate to cavernous sinus thrombosis, temporal lobe abscess, encephalitis, central retinal artery thrombosis. Distinct to other cases, the female in this case had no involvement of orbital structures. The walls of orbit, extraconal and intraconal compartments demonstrated no abnormality. The diminution of vision is due to thrombosis of ophthalmic artery and its branches secondary to internal carotid artery thrombosis consequent to left sphenoid sinusitis with contiguous spread from maxillary and ethmoid sinuses with possible predisposition to orbital apex syndrome. Computed tomography scans were obtained for all studied patients for chest and paranasal sinuses. Magnetic resonance imaging (MRI) studies were performed when orbital or intracranial involvement was suspected. Also, magnetic resonance venography (MRV) was obtained to assess sinus thrombosis. Patients were biopsied for histopathological confirmation of AIFR for causative organism using (H &E), periodic acid-Schiff, and methenamine silver staining. Mucor and Aspergillus species were histologically differentiated based on their microscopic appearance and treate 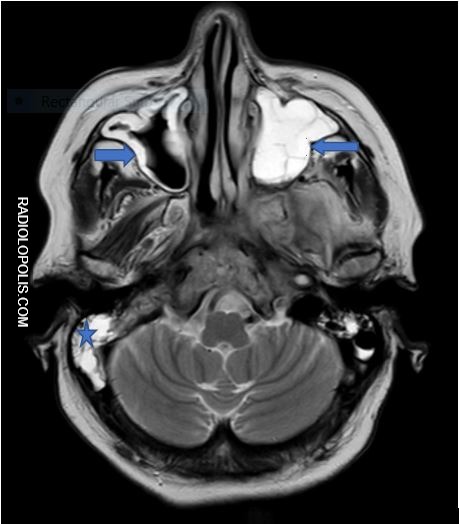 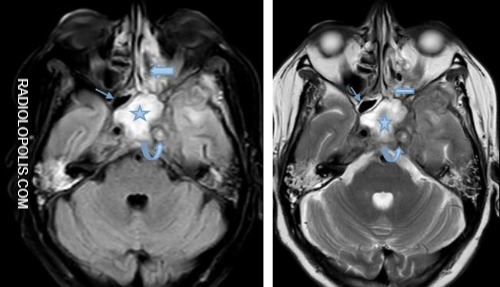 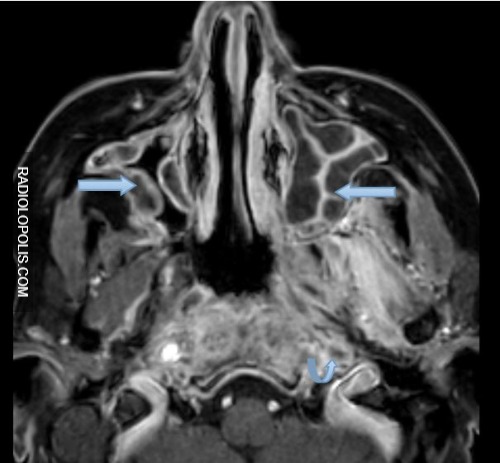 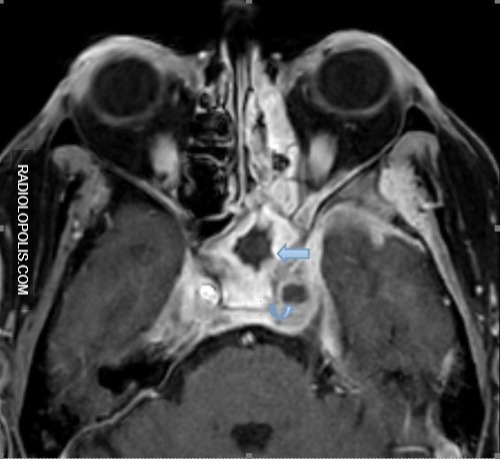 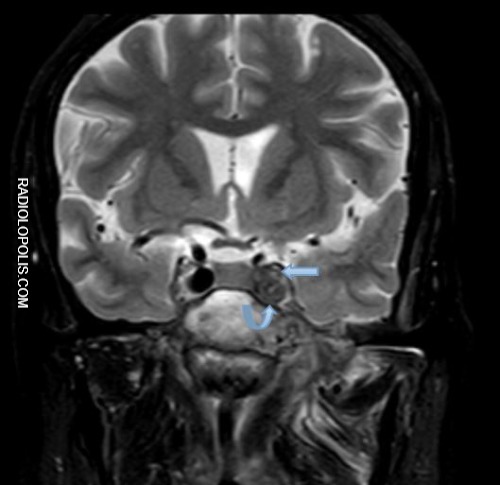 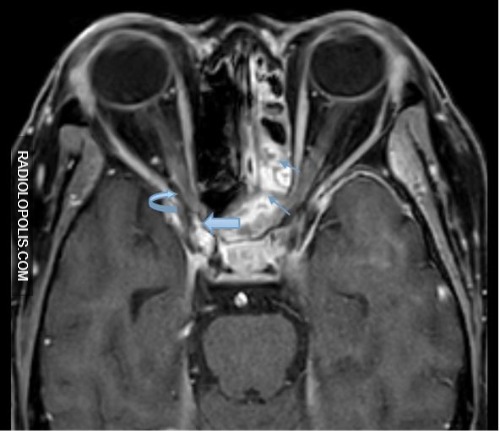 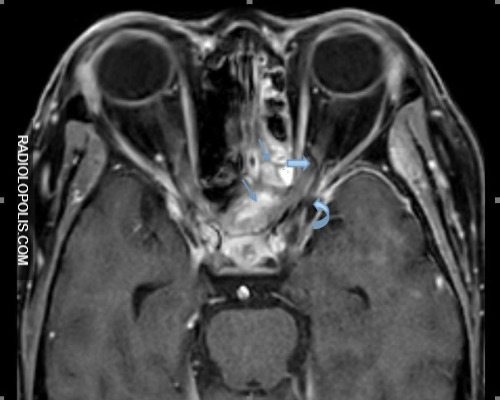 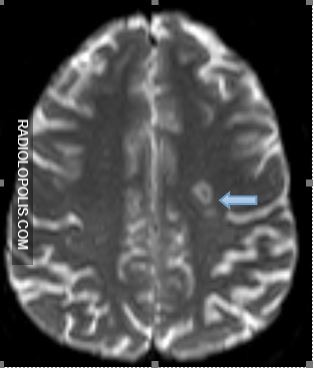 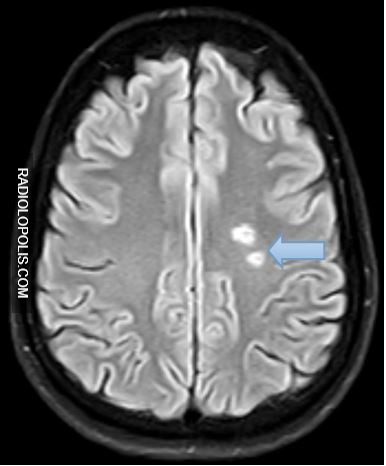 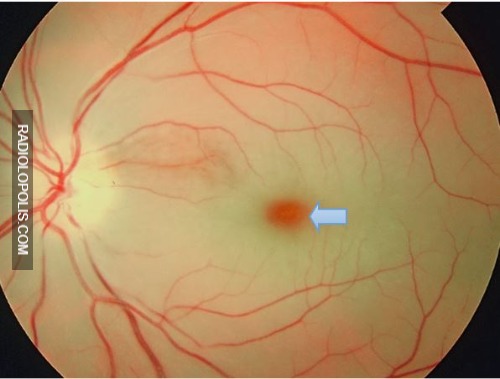 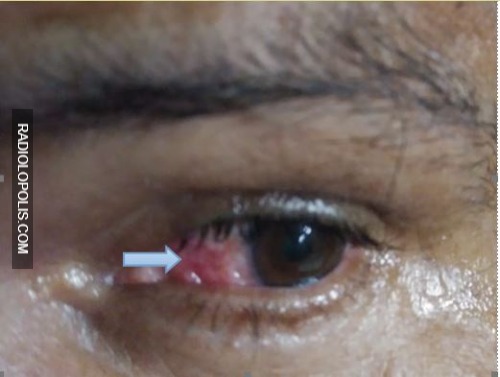