MRI findings in an atypical presentation of Miller Fisher Syndrome: A Case Report 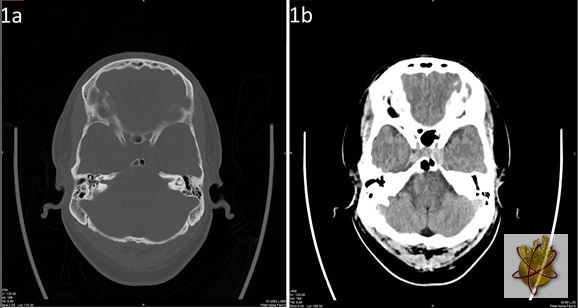 MRI findings in an atypical presentation of Miller Fisher Syndrome: A Case Report

The non-contrast enhanced Brian CT and MRI were negative for abnormalities (Figure 1). However, the contrast-enhanced Brain MRI showed facial nerve enhancement bilaterally within the internal auditory canal (Figure 2). While the contrast-enhanced lumbar spine MRI demonstrated thickening and enhancement of cauda equina nerve roots and pia matter contrast uptake along the dorsal and ventral surfaces of conus medullaris (Figure 3). The constellation of clinical, laboratory, and diagnostic imaging findings were consistent with a diagnosis of Miller Fisher Syndrome. The patient received IVIG treatment for five days, after which there was a significant clinical improvement. Subsequently, the patient discharged to rehabilitation services.

DISCUSSION Miller Fisher Syndrome (MFS) characterized by a presentation of ophthalmoplegia, ataxia, and areflexia [1]. Dr. Fisher [1] described three cases in 1956. MFS is a variant of Guillain barre syndrome (GBS), an acute autoimmune polyneuritis characterized by sudden onset of an ascending symmetric paralysis of the extremities [2], whereas, Miller Fisher Syndrome has descending pattern with cranial nerves involvement. The mechanism by which MFS and GBS develop is through the production of cross-reactive epitopes. The cross-reactive epitope is a sequala of a viral infection, most commonly an upper respiratory or gastrointestinal agent. The result is demyelinating polyneuropathy [3]. The incidence of MFS is approximately 0.09 per 1000000 per year [3]. MFS is more common in males with a ratio of 2:1 male to female. Comparable to the presented case, the mean age is 43.6. Viral infections are a significant risk factor as it usually precedes up to 71.8% of cases, the majority of patients recover in approximately 10.1 weeks indicating a good prognosis [4]. Diagnosis of MFS achieved through the presence of characteristic symptoms and signs, CSF analysis, electrophysiological studies, and imaging findings. Clinically a triad of ataxia, areflexia, and ophthalmoplegia and occasionally facial nerve palsy typically present [1]. CSF analysis demonstrates elevated protein levels without cells, immunological assessment of the CSF commonly associated with anti-GQ1b antibodies in most MFS cases [5,6]. Electrophysiological studies usually show demyelination characteristics [7]. Radiological findings include enhancement of nerve roots and the involved cranial nerves [2,8]. The presented case uniquely involved the facial nerve early, whereas in most reported cases, the facial never had late involvement. Moreover, there was no significant ophthalmoplegia in this reported case. The facial nerve is involved in approximately 32% to 50% according to studies by Mori et al. [9] and Lyu et al. [10], respectively. Typical presentations in this case included gait instability and bilateral progressive lower extremity weakness. Treatment of Miller Fisher syndrome is like that of Gillian bare syndrome, which constitutes IVIG and plasmapheresis; a few reported cases demonstrated accelerated recoveries such as a case reported by R Littlewood and S Bajada [11] and Arakawa et al. [12] among others. In conclusion, MFS diagnosed through the clinical and laboratory workup; however, MR imaging may contribute significantly to confirming and excluding other possible etiologies.

MR imaging findings in an atypical presentation of MFS are not frequently demonstrated in literature. Identification of imaging characteristics of this entity which mainly includes enhancement of nerve roots and involved cranial nerves is of a great value in confirming diagnosis and following up response to therapy. 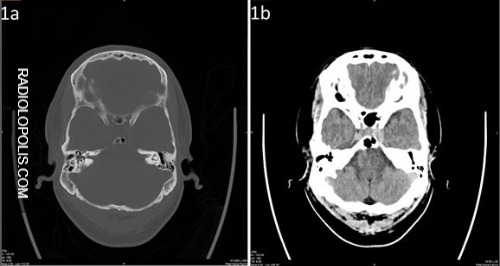 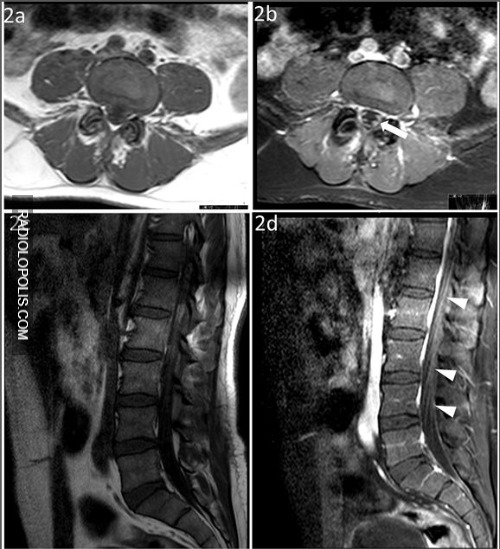 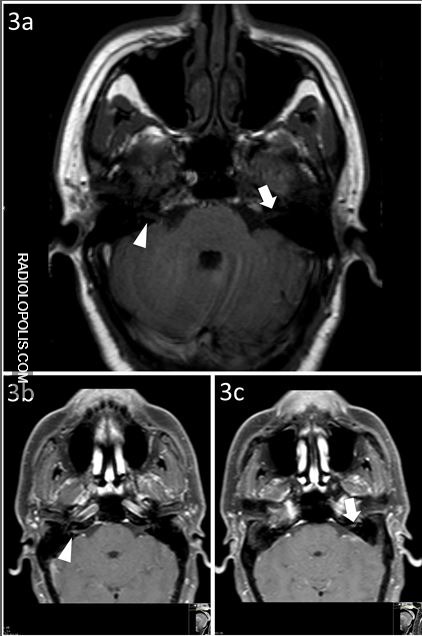 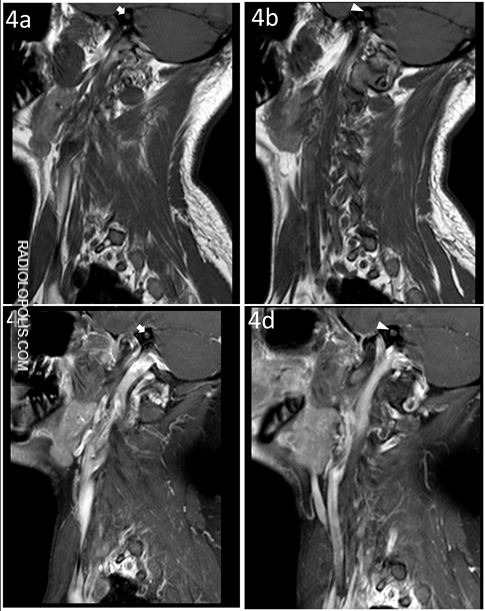