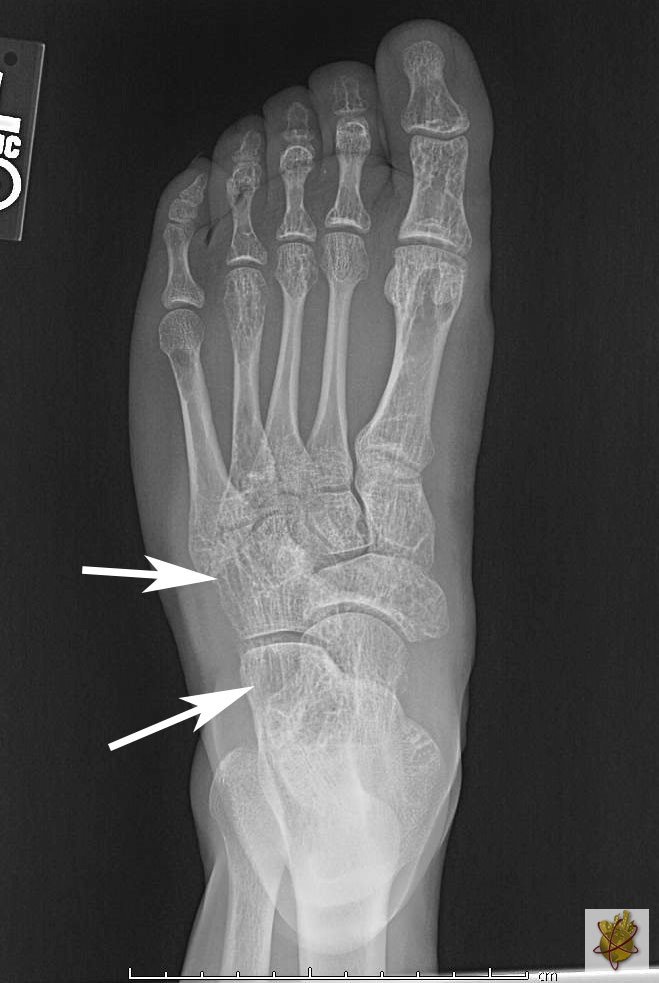 An 18-year-old male Army reservist presented with left lower extremity pain for one year. The pain began after a ruck march during basic training at which time he was diagnosed with a stress injury. His pain stopped during a 9-month period away from military operations and restarted when he began running again. The pain was aggravated by use and partially relieved by rest.

Initial radiographs demonstrated a diffuse “lacelike” appearance of medullary bone with mixed areas of prominent trabeculation interspersed with lucent areas involving the distal tibia and the bones of the foot (Fig. 1a, 1b). Subsequently, nuclear medicine bone scintigraphy was performed which showed moderate generalized uptake of the left ankle, mid tarsal region and first ray with focal uptake in the left 5th metatarsal (Fig. 2). These findings were suggestive of a chronic, infiltrative bone marrow process for which an MRI was recommended. The differential diagnosis considered at this time included sarcoidosis, infiltrative bone marrow disorders, hyperparathyroidism, multiple enchondromas, and osseous hemangiomas. An MRI with and without contrast of the left foot and ankle demonstrated widespread polyostotic marrow replacement with preserved, coarsened trabeculations. The marrow signal abnormality was isointense to muscle on T1 (Fig. 3), slightly hyperintense to muscle on T2 (Fig. 4) and showed uniform enhancement following intravenous contrast (Fig. 5). Surrounding the marrow abnormalities were lobular, thin sclerotic margins. Additionally, there were areas of high-grade endosteal scalloping and a small focus of intense synovial enhancement adjacent to the lateral talar dome. The primary differential diagnosis at this time included sarcoidosis and fibrovascular replacement of bone marrow. Alternatively, uncommon presentations of more common processes were also considered although thought less likely. These included: low-grade chondral lesions, aneurysmal bone cyst, tuberculosis, leukemia, lymphoma, and metastases. Since a definitive diagnosis was unable to be made radiographically, a biopsy was recommended. Open biopsy and curettage were performed of the distal lateral tibia. This location was selected because it is easily accessible and would have less morbidity than the smaller bones of the foot and ankle. The biopsy sections submitted demonstrated sheets of large epithelioid cells infiltrating marrow space eliciting a reactive woven bone response (Fig. 6). The epithelioid cells were characterized by abundant eosinophilic cytoplasm and oval to kidney-shaped nuclei with fine chromatin. Occasional intracytoplasmic vacuolization was identified, with some of the vacuoles filled with red blood cells (Fig. 7a, 7b). Cytologic atypia was mild to moderate, with no necrosis or widespread mitotic activity identified. The epithelioid cells were strongly and diffusely positive for CD34, CD31 and TFE3, showed weak staining for CD68 and were negative for pancytokeratin, CD1a, S-100 and SOX-10 (Fig. 8). Proliferation index as measured by Ki-67 was low (<1%). Ancillary FISH testing for TFE3 rearrangement (Xp11.2) was attempted but was non-informative, with no hybridization signals available for analysis. The hybridization probe failure was felt to be most likely secondary to decalcification of the biopsy material. This constellation of

Epithelioid hemangioendothelioma (EHE) was first described by Weiss and Enzinger in 1982 as a unique tumor of vascular lineage characterized by an “epithelioid” or “histiocytoid” endothelial cell morphology with a clinical course intermediate between that of hemangioma and angiosarcoma [1,2]. Even though this rare endothelial vascular neoplasm was originally described in the lungs, liver, and other soft tissues, it has increasingly been documented in bone. While primary malignant vascular tumors of the bone are extraordinarily rare, representing <1% of primary malignant bone tumors, EHE is the most common malignant vascular tumor of bone [1,3-4]. The World Health Organization (WHO) classification of vascular tumors of bone describes EHE as an intermediate-grade tumor, separating its classification from the other primary vascular bone tumors: hemangioma (benign), epithelioid hemangioma (locally aggressive), and angiosarcoma (malignant) [3]. EHE occurs more often in males with a 2:1 ratio and with a peak incidence in the 2nd and 3rd decades of life, although it can present at any age [1,5-8]. EHE of the bone can affect the calvarium, axial skeleton or appendicular skeleton with the majority of cases (62%) affecting the lower extremities [1,8]. It can be a solitary lesion; however, it frequently presents in a multicentric pattern involving a specific region of the body [1,9]. The most common clinical presentation of EHE is localized pain and swelling; additionally, pathologic fractures may occur. The radiographic appearance of EHE typically shows lytic lesions with a variable degree of peripheral sclerosis and an occasional honeycomb appearance [1,9]. Additionally, cortical destruction and expansion may commonly be seen. On MRI, EHE will demonstrate low to intermediate signal intensity on T1-weighted images and high signal intensity on T2-weighted images. Due to the high vascularity of the lesion, it will appear homogenously enhanced with contrast on CT and MRI [8]. Bone scintigraphy and 18F-FDG PET will show increased uptake of the lesions and can be used to evaluate the extent of the lesions [1,6-7,10-11]. The histologic diagnosis of epithelioid vascular tumors has historically been challenging due to significant overlap between the various tumor subtypes [12]. EHE is characterized by sheets or cords of epithelioid cells typically present in a myxohyaline background [1,13-14]. In contrast to angiosarcoma, the epithelioid cells of EHE demonstrate only mild to moderate cytologic atypia and rare mitoses. The vascular origin of the neoplasm is confirmed on immunohistochemistry, which demonstrates staining for vascular markers such as CD31, CD34, FLI-1 and ERG. Ancillary molecular studies may be useful in confirming the diagnosis, as most cases demonstrate a recurrent t(1,3)(p36;q25) translocation, resulting in fusion of WWTR1 at 3q25 to CAMTA1 at 1p36 [3,12,14-16]. Rearrangement of TFE3 at Xp11.2 has been recently described in a

Epithelioid hemangioendothelioma of the bone demonstrates a coarsened trabecular appearance radiographically; whereas, more advanced imaging will demonstrate a marrow replacing process. Biopsy is ultimately required to make the definitive diagnosis and subsequent screening for metastatic disease with CT chest, abdomen, and pelvis must be obtained to look for potential visceral involvement. 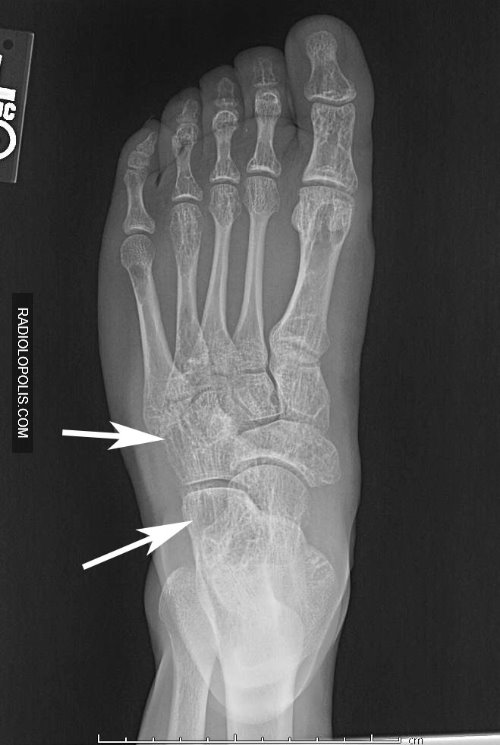 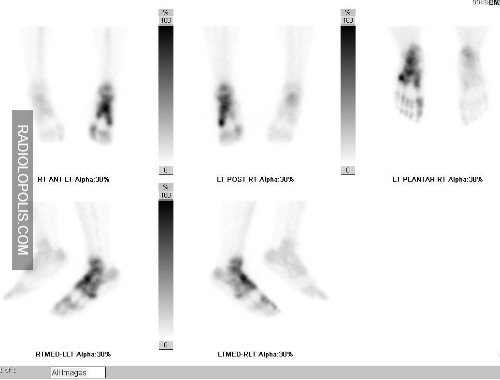 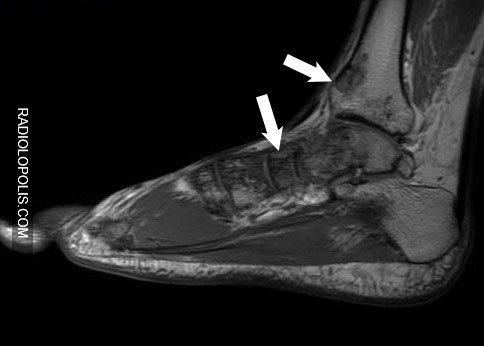 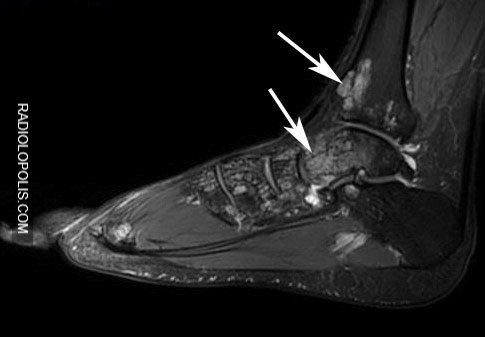 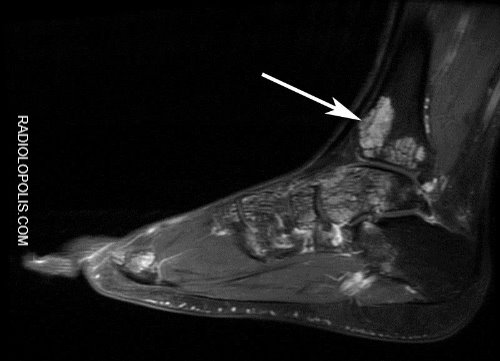 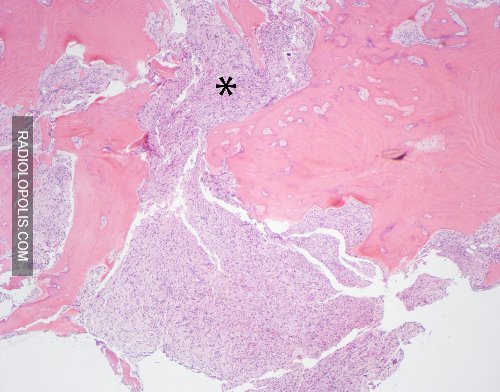 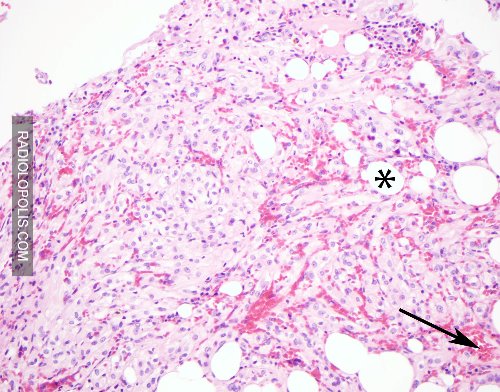 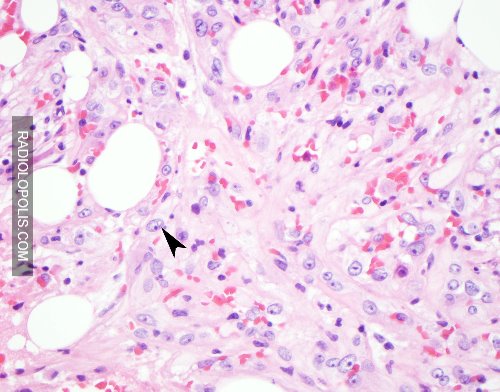 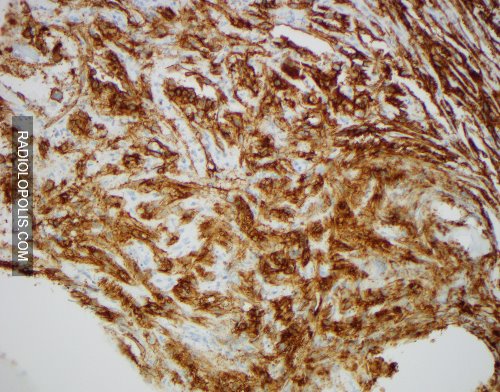