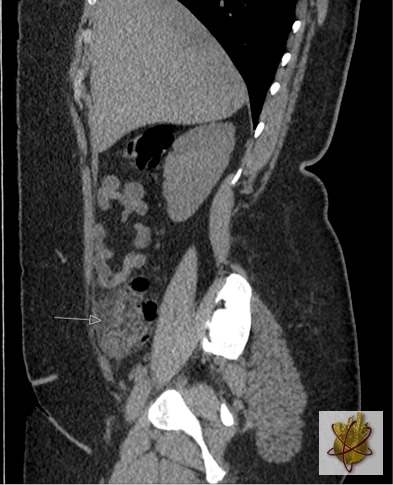 A 25-year-old female presented to hospital with a three-day history of pain in her right iliac fossa. The pain was first cramp-like in nature, but then developed into sharp pain which was worse on movement. This was associated with loss of appetite and feeling feverish, but no other systemic symptoms. She had no previous surgeries. Examination of the abdomen revealed some tenderness in the right iliac fossa, with no guarding. Urinalysis was positive for small amount of blood only, and she had a negative pregnancy test. She had a white cell count of 14.6, and a c-reactive protein of 43.5. Initial differential diagnoses were that of renal calculi, ovarian cyst, or appendicitis.

Spiral CT was chosen as investigation of choice due to equivocal clinical findings and high body mass index, to investigate the cause of her pain. An abnormality was noted in relation to the tip of the caecum where there is a walled off area of inflammatory change relating to the appendix. It was decided that these appearances were consistent with a walled-off appendicitis with no evidence of appendiceal perforation. She was consented for laparoscopic appendicetomy and prepared for theatre. Laparoscopic access was created with open insertion of the 10mm umbilical port and two 5mm ports. This enabled visualisation of a necrotic epiploic appendage of the ascending colon wrapped in omentum and adhered to the anterior abdominal wall. The appendix was clinically normal in appearance. There was no free fluid in the pelvis, no Meckel’s diverticulum, and both ovaries and the uterus were normal. The epiploic appendage was freed and excised. The appendix was also removed at the same time to avoid future clinical dilemma and rule out possibility of microscopic appendicitis. Two biopsy samples were taken for analysis. This revealed a histologically normal appendix, and fat necrosis of the epiploic appendage of the ascending colon. There were no perioperative or postoperative complications, and the patient was discharged on the second postoperative day following good recovery.

The epiploic appendices are fat-filled pouches of peritoneum found around the colon. Epiploic appendagitis is an uncommon condition caused by the torsion of an appendage or venous thrombosis, leading to compromised vascular supply, followed by necrosis. The patient with epiploic appendagitis will present with symptoms relating to the site of the appendage. This may mimic other conditions of the acute abdomen, such as acute appendicitis, cholecystitis, and diverticulitis. Unlike more sinister pathologies, this usually runs a self-limiting course and the majority of cases are managed conservatively with non-steroidal anti-inflammatory drugs, and no need for antibiotics. The true incidence is unknown, but it is thought to be between 0.3-1% of patients initially suspected of having acute appendicitis. Risk factors for this include obesity, sudden weight loss, and strenuous exercise. Surgery may be required in a small subset of patients with complications or non-resolving symptoms. As such, it is an important differential in the acute abdomen to avoid unnecessary intervention. Radiological signs suggesting epiploic appendagitis include an oval lesion 1.5-3.5cm in diameter with surrounding inflammatory changes with fat stranding, and similar attenuation values to fat. Many case reports have reported accurate and reliable diagnosis with CT, and it is the current gold-standard investigation. However, it does not have 100% sensitivity or specificity. Here, we presented a case of right iliac fossa pain which was clinically and radiologically misidentified as appendicitis. The presence of epiploic appendagitis was only elucidated during surgery. This highlights the importance of addressing possible differentials during the patient consent process, as the eventual operation may be different to the operation the patient has been consented for.

Correct early elucidation of epiploic appendagitis with CT can lead to avoidance of unnecessary interventions as management is conservative, but this is not 100% sensitive or specific. When consenting for appendicectomy, consider the presence of other differentials such as epiploic appendagitis, as the eventual procedure may have to be changed during the operation. 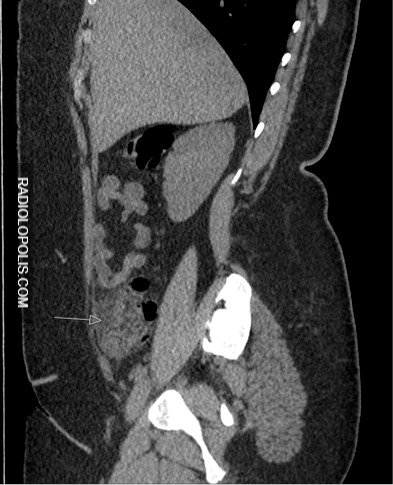 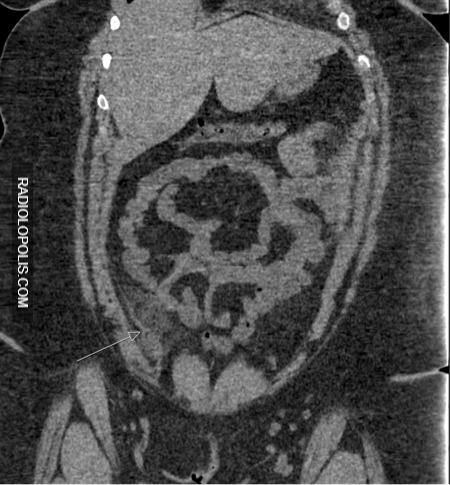 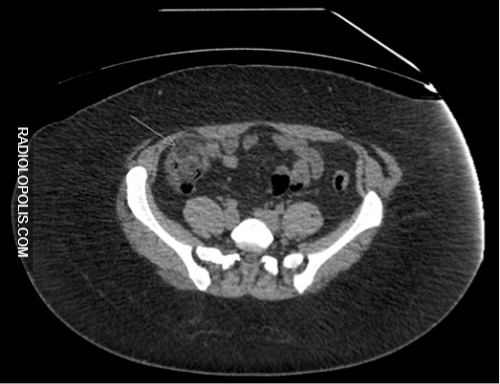